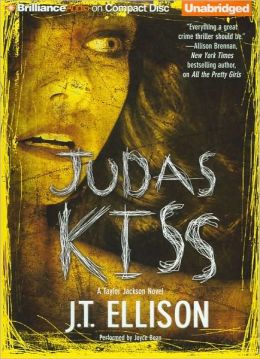 It was a murder made for TV: a trail of tiny bloody footprints. An innocent toddler playing beside her mother's bludgeoned body. Pretty young Corinne Wolff, seven months pregnant, brutally murdered in her own home.

Both cases hinge on the evidence--real or manufactured--of crimes that go beyond passion, into the realm of obsessive vengeance and shocking betrayal. Just what the networks love.

My thoughts: Browsing through the titles over on Overdrive, I came upon this. The title completely grabbed my attention. Even though this was the third book in the series (and I don't like to read books out of order), I couldn't help but listen to this one. I was in a reading slump the last month and I needed an audio that will get me back into the swing of things. This audio did the trick.

Being the third book in a series, Judas Kiss could be a stand-alone. There were mentions of things that happened in the previous two books, but it was not enough to get me confused. In fact, it made me want to know more of what happened to Taylor, the main character, and go back to read the first two books.

The plot was interesting but not absolutely shocking. The prologue was a huge attention grabber. It was disturbing and chilling. The rest of the book had its twists but some of it was predictable, though still enjoyable. What did let me down was that I expected a bigger climax with how everything was building up. Also, the way the crime was solved did not make sense to me because of the prologue. However, the way the book ended made me want to know more about Taylor's outcome.

My thoughts on the performance: Joyce Bean was a good narrator. She was clear and knew how to change her voice for different characters. She also knew how to emphasize her tone to make the plot more exciting. There were a few parts that she sounded boring to me; I'm not sure if it was because her voice was not as exciting or if the writing in the story was dull. I still liked listening to her though.

Overall, this audio was a great read. It help me get out of my reading funk and made me like a new series. I rate it: