Review: Turning This Thing Around by Keith Maginn 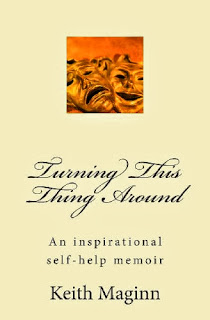 Turning This Thing Around is an inspiring memoir of overcoming personal struggles. This brutally honest, deeply personal account of redemption takes readers on a moving spiritual journey. Confronted with a myriad of obstacles–a debilitating arthritic disease, narcolepsy, anxiety and depression–the author was outwardly happy, but inwardly miserable.

Pushed to the lowest point of his life, he discusses how he gradually turned things around and used his experiences to grow as a person. Supplemented by quotes from Gandhi to Dr. Wayne Dyer to Eckhart Tolle, Turning This Thing Around has universal themes that speak to nearly everyone, as we all must face challenges as part of being human. It is a self-help memoir of sorts: The author discusses not only what he had to overcome, but how he did so–and how others can, too.

Unlike many popular memoirs on the market, this is a story that more people can relate to. The author didn’t grow up in an eccentric family (Jeannette Walls in The Glass Castle, memoirs by Augusten Burroughs), nor did he travel to Italy, India and Indonesia, as Elizabeth Gilbert did in Eat, Pray, Love. Rather, Turning This Thing Around is a story of a normal young man’s resiliency when battling extraordinary circumstances.


My Thoughts:
Everybody has their own problems, small or big. We work on our problems in many different ways to help us stay stable and happy. In this memoir, Keith Maginn had many extreme issues but how he dealt with them was inspiring.

The first half of the book was very strong. We came to learn who Keith was and what his problems were. He was a very active person who didn't know how to relax, which affected his emotions and physical health. He also described his relationship with his fiancé. Their relationship was very chaotic. Keith's emotions were very evident during this portion of the book. I sympathized with him and could not begin to imagine the turmoil he was in.

The second half of the book was about how Keith began to heal, and it was a little bit weaker. He began to find out what he had and began to learn how to help himself get better. His emotions and experiences were not as strong here since the majority of his telling concentrated on quoting other works. I did enjoy the quotes because they were thought provoking and they gave a sense as to what was going in Keith's mind, but I would have liked to have seen more of his own writing in this part.

In the end, I found myself feeling very proud of Keith. He went through so much, to the point that many would have given up. I was very glad to read that he didn't but instead had faith to keep going. I would definitely recommend this book to anyone who is struggling to show that there is still hope. I rate it:

I interviewed Keith a few months ago. Go check out his interview.
Posted by Vonnie at 9:40 AM