TBR: The Exile by Diana Gabaldon 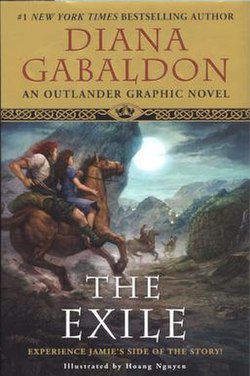 After too long an absence, Jamie Fraser is coming home to Scotland—but not without great trepidation. Though his beloved godfather, Murtagh, promised Jamie’s late parents he’d watch over their brash son, making good on that vow will be no easy task. There’s already a fat bounty on the young exile’s head, courtesy of Captain Black Jack Randall, the sadistic British officer who’s crossed paths—and swords—with Jamie in the past. And in the court of the mighty MacKenzie clan, Jamie is a pawn in the power struggle between his uncles: aging chieftain Colum, who demands his nephew’s loyalty—or his life—and Dougal, war chieftain of Clan MacKenzie, who’d sooner see Jamie put to the sword than anointed Colum’s heir.

And then there is Claire Randall—mysterious, beautiful, and strong-willed, who appears in Jamie’s life to stir his  compassion . . . and arouse his desire.

But even as Jamie’s heart draws him to Claire, Murtagh is certain she’s been sent by the Old Ones, and Captain Randall accuses her of being a spy. Claire clearly has something to hide, though Jamie can’t believe she could pose him any danger. Still, he knows she is torn between two choices—a life with him, and whatever it is that draws her thoughts so often elsewhere.

My Thoughts: I love Outlander. I love the books and I love the TV series. I don't always read graphic novels, but I bought this one years ago because it was Outlander. I was thrilled to have been able to finally read it. I could not wait to read Jamie's side of the story.

Story: This graphic novel was one-third of the first novel. It was a very brief summation of what happened. Along with learning Jamie's side of the story, the reader also got to witness Murtagh's point-of-view. I would not have thought of being interested in seeing the story through Murtagh's eyes, but it made sense because he did follow Jamie everywhere. Both Jamie's and Murtagh's accounts added more depth to the happenings of Outlander. However, because this was a graphic novel, the majority of the meat and "feels" of the novel were missing. It read very fast and some scenes did not flow as well. If I was not aware of the original story, I would have been lost trying to figure what the plot was about. This graphic novel was indeed aimed for Outlander fans and not new readers.

Illustrations: The artworks in this graphic novel were created by the talented Hoang Nguyen. I loved how Diana Gabaldon gave Nguyen a chance to prove his talent (his main focused was on anime), and be willing to collaborate with him. The illustrations were beautiful. I enjoyed looking at the details and was awed at his interpretation of what the characters and events looked like. My favorite illustration would have to be the wedding night scene. Nguyen was able to capture the general idea of what that night was like for both Claire and Jamie. I do have to admit, though, that it was hard distinguishing the male characters. They all looked alike to me. Also, many of the facial expressions bothered me because it gave each character a sense of being "evil". Despite these feelings, the drawings were still stunning.

As a whole, this graphic novel was perfect in refreshing someone what Outlander was about. I was not attached to this one as much because how brief it was. But, it was still entertaining to observe all of Nguyen's images. I rate this:

This book was voted for my TBR read for the month of May. I am thrilled to finally have a review on time! :D