Review: Fairest of All 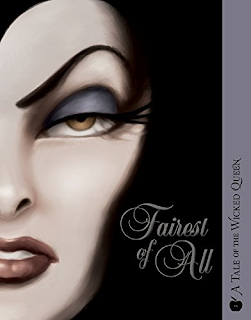 The tale of the young princess and her evil stepmother, the Wicked Queen, is widely known. Despite a few variations from telling to telling, the story remains the same—the Queen was jealous of the girl’s beauty, and this jealousy culminated in the Queen’s attempt on the sweet, naive girl’s life.

Another tale far less often spoken of is the one that explains what caused the Queen to become so contemptuously vile. Still, some have attempted to guess at the reason. Perhaps the Queen’s true nature was that of a wicked hag and her beautiful, regal appearance a disguise used to fool the King. Others claim that the Queen might have hated the girl for her resemblance to the King’s first wife. Mostly, the Queen is painted as a morally abhorrent woman who never loved another being during the course of her miserable life.

In fact, the theories about exactly what cause the Queen’s obsessive vanity and jealous rage are too numerous to catalog. This book recounts a version of the story that has remained untold until now. It is a tragic tale of love and loss, and it contains a bit of magic. It is a tale of the Wicked Queen. 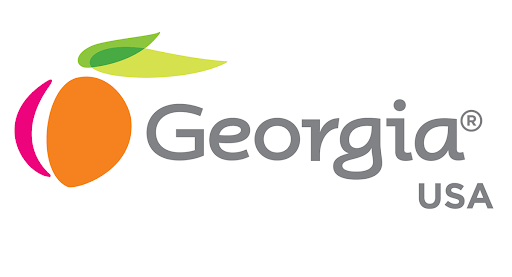 Earlier this July, my husband and I visited my husband's sister in Georgia. We were invited to do a special hiking trip that was incredibly fun. Though the hiking trip was only going to take a couple of days, my husband and I decided to stay in Georgia for a week. Since it was my first time visiting this state, I researched things to do and I found many great things. And of course, I made sure to include a couple of literary excursions.
The first literary item on our list was to visit the Margaret Mitchell house in Atlanta. 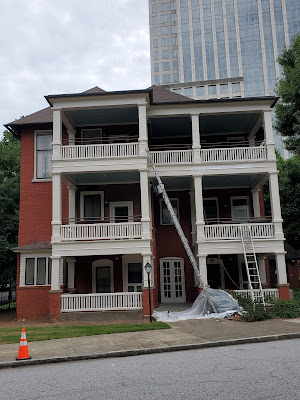 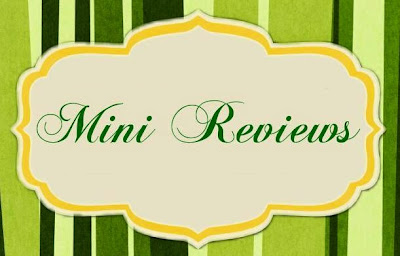 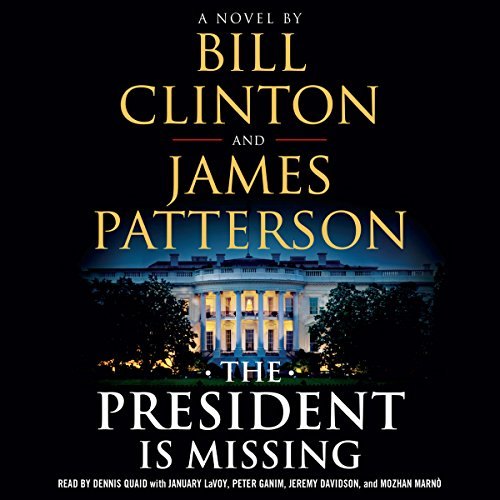 The President is Missing by Bill Clinton & James Patterson

It has been a while since I've read or listened to a political thriller. I was actually excited to start this one after learning President Clinton co-authored this book. I'm not sure how much of it was written by him but I suspected certain parts of the book were heavily inspired by him. This had an interesting premise of a virus that could cripple the United States. President Duncan goes "missing" in order to stop the virus from activating. The story was fast-paced and exciting. I highly enjoyed the different narrators as they read the different characters for each chapter.

However, some of the information about the enemies and the virus went over my head (I found myself day dreaming a lot) and Duncan's silence regarding his knowledge of what was happening at the beginning was a little irritating. Also, his presidential speech at the end recapped everything, and I mean everything that happened in the book. I felt that the story was just repeating itself. This could have been shortened or skipped over.

But...this was not a bad book. I may read the second book written by Patterson and Clinton. I rate it: 3 stars. 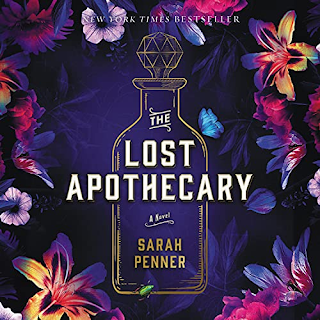 Hidden in the depths of eighteenth-century London, a secret apothecary shop caters to an unusual kind of clientele. Women across the city whisper of a mysterious figure named Nella who sells well-disguised poisons to use against the oppressive men in their lives. But the apothecary’s fate is jeopardized when her newest patron, a precocious 12-year-old, makes a fatal mistake, sparking a string of consequences that echo through the centuries.

Meanwhile in present-day London, aspiring historian Caroline Parcewell spends her tenth wedding anniversary alone, running from her own demons. When she stumbles upon a clue to the unsolved apothecary murders that haunted London 200 years ago, her life collides with the apothecary’s in a stunning twist of fate - and not everyone will survive.

With crackling suspense, unforgettable characters, and searing insight, The Lost Apothecary is a subversive and intoxicating debut novel of secrets, vengeance, and the remarkable ways women can save each other despite the barrier of time. 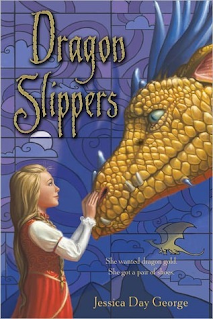 Poor Creel. She can't believe her aunt wants to sacrifice her to the local dragon. It's a ploy to lure a heroic knight so that he will fight the dragon, marry Creel out of chivalrous obligation, and lift the entire family out of poverty. Creel isn't worried. After all, nobody has seen a dragon in centuries.

But when the beast actually appears, Creel not only bargains with him for her life, she also ends up with a rare bit of treasure from his hoard, not gold or jewels, but a pair of simple blue slippers-or so she thinks. It's not until later that Creel learns a shocking truth: She possesses not just any pair of shoes, but ones that could be used to save her kingdom, which is on the verge of war, or destroy it.

During the Memorial Day weekend, my little family and I went to Oceanside, California for some much needed self-care. We stayed at a farm, which was very calm and serene. We were able to hike in the regional park literally across the street from our stay and our hosts lent us bicycles so we could bike the 9 miles to the beach. And of course, we ended our mini trip by searching for Little Free Libraries. Here are three that we found:

This one was in front of an elementary school 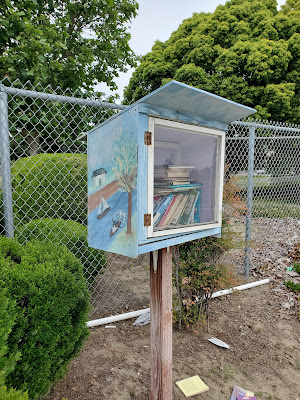 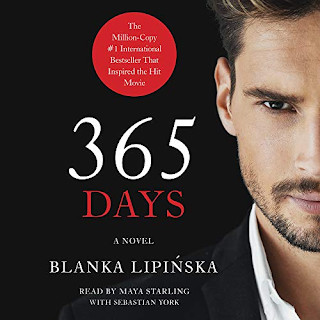 Laura Biel and her boyfriend are on a dream vacation in beautiful Sicily. On the second day of their trip, her 29th birthday, she is kidnapped. Her kidnapper is none other than the head of a powerful Sicilian crime family, the incredibly handsome, young Don Massimo Torricelli, who is determined to possess her at all costs. Massimo has his reasons. During an earlier attempt on his life, a vision appeared before his eyes: a beautiful woman, identical to Laura. After surviving the attack, he vows that he will find the woman in his vision and make her his own. No matter what.

For 365 days, Massimo will keep Laura captive in his palatial estate and attempt to win her heart. If she doesn’t fall in love with him during this time, he will let her go. But if she tries to escape at any point, he will track her down and kill her entire family.

Soon Laura develops a fascination with her handsome and powerful captor. But as a precarious, risky relationship forms between them, forces outside their control threaten to tear them apart...
Goodreads 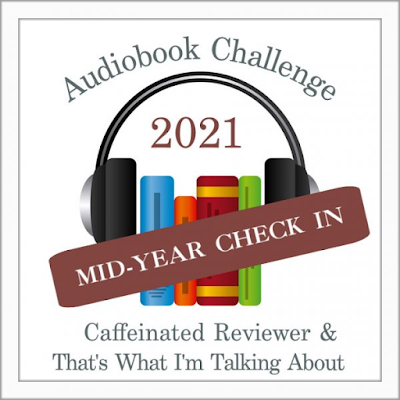 It's time to check-in and see our progress with the 2021 Audiobook Challenge hosted by Caffeinated Reviewer & That's What I'm Talking About. There are different achievement levels and my goal is:
My Precious (I had my earbuds surgically implanted) 30+
Here Are My Listens So Far:
1. Fool by Christopher Moore
2. Still Foolin' 'Em by Billy Crystal
Read more »
Posted by Vonnie at 1:50 PM 7 comments: 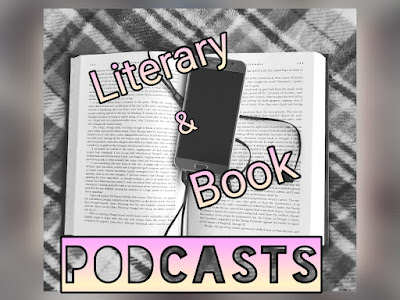 At the start of the COVID-19 Pandemic, I found myself being drawn to podcasts. I listened from paranormal stories, to unsolved murders, to self-help podcasts. Though many of these podcasts were great, I found myself enjoying the book related ones the most. So I decided that every so often, I would share with you a literary and book podcast that I highly enjoy.

Here's the first one: 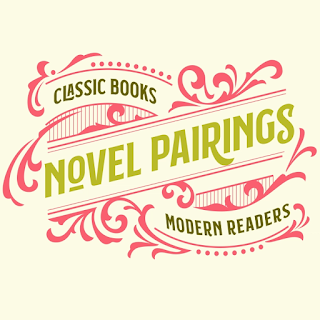