Audiobook: Paola Santiago and the River of Tears 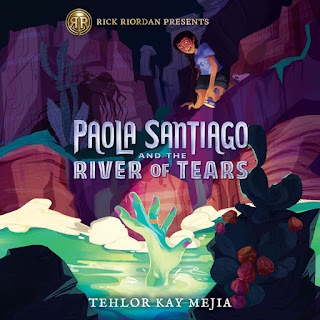 Space-obsessed 12-year-old Paola Santiago and her two best friends, Emma and Dante, know the rule: Stay away from the river. It’s all they’ve heard since a schoolmate of theirs drowned a year ago. Pao is embarrassed to admit that she has been told to stay away for even longer than that, because her mother is constantly warning her about La Llorona, the wailing ghost woman who wanders the banks of the Gila at night, looking for young people to drag into its murky depths.

Hating her mother’s humiliating superstitions and knowing that she and her friends would never venture into the water, Pao organizes a meet-up to test out her new telescope near the Gila, since it’s the best stargazing spot. But when Emma never arrives and Pao sees a shadowy figure in the reeds, it seems like maybe her mom was right. . . .

Pao has always relied on hard science to make sense of the world, but to find her friend she will have to enter the world of her nightmares, which includes unnatural mist, mind-bending monsters, and relentless spirits controlled by a terrifying force that defies both logic and legend.

My thoughts: I grew up with tales of La Llorona. My mom will tell me these Mexican ghost stories right before going to bed or whenever I was bad. I also remember my friends and I would scare each other in school with stories of her. La Llorona was a big part of my upbringing so when I heard there was a Rick Riordian Presents book coming out with La Llorona, I was stoked! I could not wait to get my hands on the audiobook version since I've enjoyed the RRP audiobooks so much! Sadly, I did not like this book as much as I was hoping for. Instead, I thought it was decent.
Pros: I loved all of the Mexican lore and culture that the story captivated. First, along with La Llorona, it had the chupacabra. Who would have thought that a baby chupacabra could be considered cute? Next, I absolutely loved how it used the chancla as a magical weapon. I kept giggling every time it mentioned how it was used to defeat ghosts and demons. Also, I liked how the main character was of Mexican decent but did not speak Spanish. Many people forget that not all Mexicans or Latinx people are able to speak the Spanish language.
Cons: It was so slow! There were many sections that it felt like it dragged. In fact, I found myself dosing off a few times or losing interest in the middle of listening to it. In addition, I thought the story would be more La Llorona centered (my fault for thinking that). In fact, it barely mentions her the first two-thirds of the book. So when it finally did mention her towards the end, I thought, "Oh yeah, it's about La Llorona." Don't get me wrong, it was a cute story of a young, brave girl trying to save her friends but my excitement to listen to a story ABOUT La Llorona left me disappointed.
As a whole, it was a decent audio production. The narrator did a good job in reading the story and the story was good enough to stick to the end. I just hoped for more. I rate it: