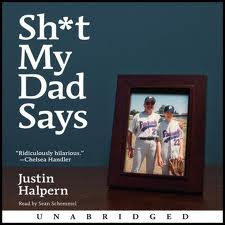 Synopsis: After being dumped by his longtime girlfriend, twenty-eight-year-old Justin Halpern found himself living at home with his seventy-three-year-old dad. Sam Halpern, who is "like Socrates, but angrier, and with worse hair," has never minced words, and when Justin moved back home, he began to record all the ridiculous things his dad said to him:


My thoughts: I had a blast listening to this audio! The title first got my attention and when reading the sample quotes, I had to give it a try. Sh*t My Dad Says was entertaining and insightful in some parts.

The book started off right away with one of Justin's father's quotes about him moving back in after a break-up. It was hilarious. I quite enjoyed how the chapters and the points in Justin's life were surrounded by the "wise" sayings of his father. His father had a bad mouth (so I don't recommend it to those who can't stand the F word) but was smart. He gave Justin advice to follow. Many of these "advices" were quite hilarious that I had to go back and listen to them again. I even shared it with my family who laughed along with me.

My thoughts on the performance: Sean Schemmel did an excellent job with bringing Justin's anecdotes to life. I especially enjoyed listening to how Sean portrayed the father's voice making each of the sayings very fun to listen to. I was quite entertained and did not find a dull moment at all.

This audiobook was short but quite enjoyable. It was what I needed for having a hectic schedule. I rate this: