Review: The Perks of Being of Wallflower by Stephen Chbosky 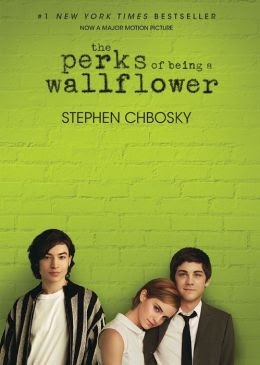 Synopsis: The Perks of Being a Wallflower is a story about what it’s like to travel that strange course through the uncharted territory of high school. The world of first dates, family dramas, and new friends. Of sex, drugs, and The Rocky Horror Picture Show. Of those wild and poignant roller-coaster days known as growing up.

My thoughts: I'm going to be honest, I was not sure what to expect about this book. I've heard many people rave about it and saw that a movie was made based on it. Also, the title made me think that the protagonist would be a girl since wallflowers are usually associated with them, so I was a bit surprised to read through the eyes of a teenage boy. The Perks of Being a Wallflower was a quick and easy read that had both good and bad points.

The good: Charlie was an interesting character. He was shy and was an outcast; he also obviously had a problem with his emotions to the point that he needed a psychiatrist. I liked how he told his story through letters written to an unknown person and I enjoyed how he tried to get out of his comfort zone.

The bad: Charlie encountered too many problems that it almost appeared to be too forced. It was like the author was trying his hardest to shock his reader. It became overwhelming at times that I became irritated with the way Charlie was telling the story. Along these lines, the writing was immature for me. I understand that it was trying to portray how naïve Charlie was and how little he knew of writing, but the simplicity of it did not make me feel connected with the characters as much. These aspects was what made me lower my rating.

In all, this was an easy and quick read that tells the story of teenage boy learning how to come out of his shell and become part of the teenage world. The book had its good points along with its bad ones. I rate it: