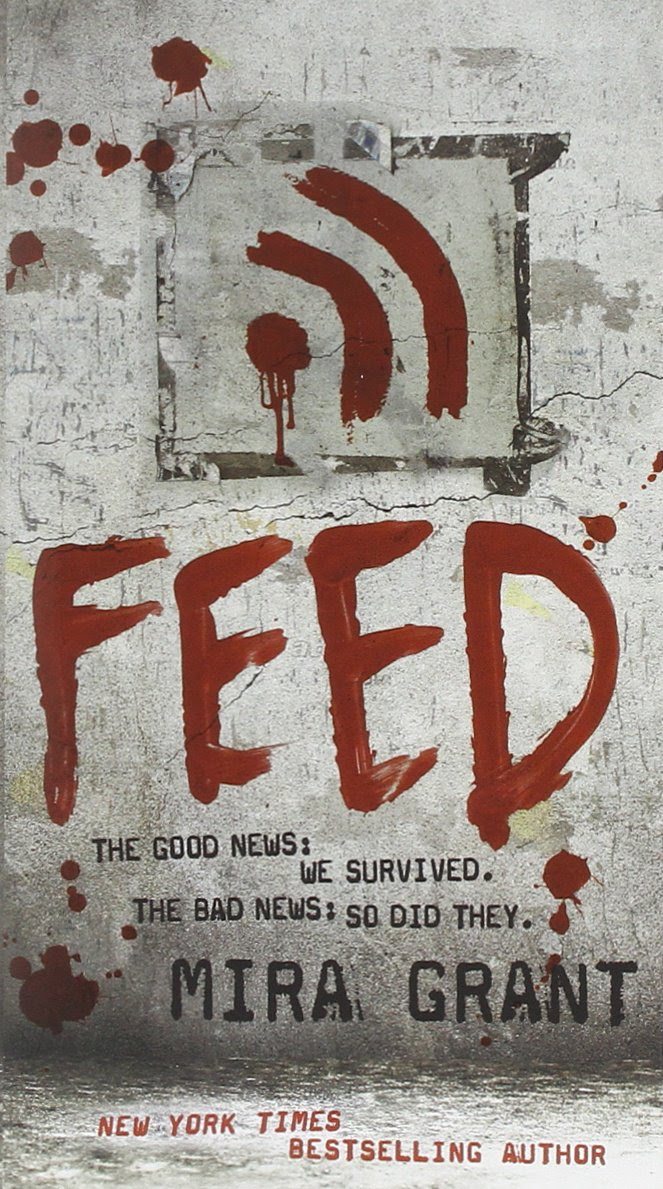 The year was 2014. We had cured cancer. We had beat the common cold. But in doing so we created something new, something terrible that no one could stop. The infection spread, virus blocks taking over bodies and minds with one, unstoppable command: FEED.

Now, twenty years after the Rising, Georgia and Shaun Mason are on the trail of the biggest story of their lives-the dark conspiracy behind the infected. The truth will out, even if it kills them.


FEED is the electrifying and critically acclaimed novel of a world a half-step from our own---a novel of geeks, zombies, politics and social media.


My Thoughts: Do you like zombies? How about blogging? Well, then you might just enjoy this book! To be honest, it took me longer than I expected to finish this book. Not because it was a horrible book, though I do have one complaint about it, but because life simply made it difficult for me to sit down and enjoy reading it. However, this book had me hooked that I simply had to finish it even if it took me the whole year.

This was a well written book. I enjoyed the plot and the world building. The idea of a future where bloggers and journalists were the celebrities was completely fun. The journalists in this world were complete bad asses who risked their lives in order to get stories for their blogs to receive ratings from the public. Our main characters, George and Shaun, get a special job to follow a presidential candidate. They are hired to document the candidate's steps as he worked to win the public's vote. However, not everything went smoothly for a George and Shaun. In fact, their lives were in constant danger. I was constantly at the edge of my seat worrying about the fate of all of the characters. Though I kind of knew who was the bad guy, I was still curious to find out how everything was going to unfold.

I won't give any spoilers away, but I will admit that this book made me cry uncontrollably towards the end. I was not expecting the outcome at all. I was completely floored. I don't think I have cried over a character in a book in such a long time. At least, not the way I did for this character. I even had to stop reading for a day on how emotional I got. So, wow! Mira Grant knew how to deliver her characters and story very well!

This leads me to the next thing: I loved Mira Grant's writing! It was amazing to see how much attention to detail she gave to everything in her book. It was obvious that she did her research because everything was described and explained as if she were an expert in the areas of technology, medicine, and politics.  The way everything was explained made the events in the story appear realistic and believable. It was easy to imagine our world going through the same chaos that happened in this book.

I do have one complaint about this book, though. I got a little annoyed with the constant mention of George's light problem. I felt as if George referred to her issue with light almost every other paragraph. After the 20th time reading about her sensitivity to light, I wanted to yell at her and say, "I get it! I get it! Your eyes are too sensitive!" Because of this, I sat the book down a few times to take a break. However, this minor issue did not ruin the book for me. It was simply a bump in the road.

In the end, this was an almost perfect book. I loved the plot, the world building, the attention to detail, and the fact that it made me cry uncontrollably. Yes, I was a little annoyed by one factor but it did not stop me from reading the book for too long. This was a well written book! I cannot wait to read the next book in the series! I rate it:

This book was voted for my TBR read for the month of January. I know...I'm late.