Audiobook: The Nanny by Gilly Macmillan 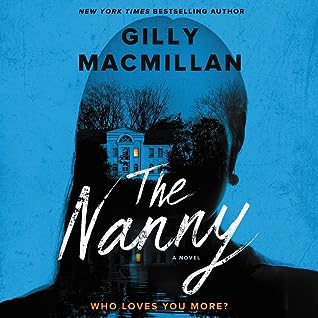 
When her beloved nanny, Hannah, left without a trace in the summer of 1988, seven-year-old Jocelyn Holt was devastated. Haunted by the loss, Jo grew up bitter and distant, and eventually left her parents and Lake Hall, their faded aristocratic home, behind.

Thirty years later, Jo returns to the house and is forced to confront her troubled relationship with her mother. But when human remains are accidentally uncovered in a lake on the estate, Jo begins to question everything she thought she knew.

Then an unexpected visitor knocks on the door and Jo’s world is destroyed again. Desperate to piece together the gaping holes in her memory, Jo must uncover who her nanny really was, why she left, and if she can trust her own mother…

In this compulsively readable tale of secrets, lies, and deception, Gilly Macmillan explores the darkest impulses and desires of the human heart. Diabolically clever, The Nanny reminds us that sometimes the truth hurts so much you’d rather hear the lie.

My Thoughts: I had a difficult time deciding how to rate this book. It had many positive things that kept me hooked but also a few negative things that made me frustrated with the book. However, I do admit that the book had me pensive these past few days after finishing it, which is usually a good sign.

Positives: The plot was engrossing. Secrets and twists were revealed slowly, which had me speculating and constantly changing my mind on what was happening. Once I made a theory of what happened, something new would present itself that would cause me to scratch my theory. Of course halfway through the book, I was able to figure out who the characters really were. And the ending...I was not surprised with the reveal but I was stunned to find out how it was resolved. A final positive thing about this audiobook production was the narration. The Nanny was read by three different people, which made it easier to distinguish each of the characters, and it made it fun to listen to.

Negatives: The characterization was not the greatest. I highly enjoyed listening to the mother's and the nanny's perspectives, but I disliked Jo's and the detective's sides. With Jo, I wanted to shake her ALL THE TIME. She had such animosity towards her mother that it was childish. I get it. She was forced to dislike her mother at a young age, but after the age of 7 she did not have as much of a negative influence to continue these feelings. Jo would not let go of her grudge towards her mother that it distorted her decisions and feelings throughout. It even made her blind to her daughter's abuse despite her own daughter telling her about it. I kept yelling at her, "You are a terrible mother!" The other character that I did not care much for was the detective. Honestly, I had no idea what his purpose was. Usually the detective in mystery/suspense books add to the plot line, but not with this one. The only thing he did was complain about the aristocracy. He was not professional when it came to his feelings, which made no sense. I kept expecting for an explanation on why he disliked the higher class, but that never came. To me, he sounded like a whiny boy.

As a whole, this was a decent book. It had great plot with an amazing ending. The characters needed more work but they were read well with the three different narrators. I rate it: