Audiobook Review: On the Come Up

A little late on this review...but hey, better late than never. :) 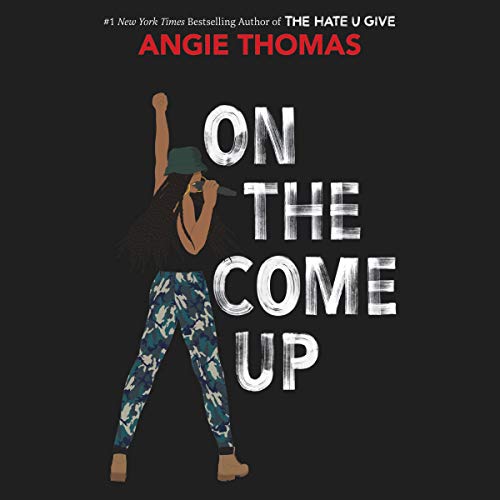 Sixteen-year-old Bri wants to be one of the greatest rappers of all time. Or at least win her first battle. As the daughter of an underground hip hop legend who died right before he hit big, Bri’s got massive shoes to fill.

But it’s hard to get your come up when you’re labeled a hoodlum at school, and your fridge at home is empty after your mom loses her job. So Bri pours her anger and frustration into her first song, which goes viral…for all the wrong reasons.

Bri soon finds herself at the center of a controversy, portrayed by the media as more menace than MC. But with an eviction notice staring her family down, Bri doesn’t just want to make it—she has to. Even if it means becoming the very thing the public has made her out to be.

Insightful, unflinching, and full of heart, On the Come Up is an ode to hip hop from one of the most influential literary voices of a generation. It is the story of fighting for your dreams, even as the odds are stacked against you; and about how, especially for young black people, freedom of speech isn’t always free.

My Thoughts: I highly enjoyed listening to Angie Thomas's, The Hate U Give, so I jumped at the chance to listen to this one. Though On the Come Up was not a sequel or prequel to THUG, it did take place in the same universe. It too was set in the Garden Heights and it mentioned the killing of Kahlil. However, the story focused on Bri and her family, as well as Bri's attempt in making it big as a rapper.
It was fun to listen to Bri's battles in the ring. She was talented and creative; she made up verses on the spot. What I loved best about her was how she tried to stay true to herself no matter how much she wanted to make it in the music industry. However, her stubbornness and her overaction to situations did get on my nerves. I had to keep reminding myself that she was a teenager so her behavior made sense.
This book raised many topics: racism, police brutality, gay love, misconceptions on a person's image, family struggles, and the shady side of the music industry. I felt that these topics were handled well and made readers aware of the issues and struggles of black people. I really wanted to hear more about Bri's mother's experience as well as her aunt's. I also wanted to know more about how the music industry shaped black people's "image." These topics were very thought provoking.
I listened to the audio production of this book and I am so glad I did. I am not a fan rap music, so if I had read this instead, the lyrics and Bri's passion would probably have gone over my head. Listening to the narrator, Bahni Turpin, made me appreciate this form of art. Ms. Turpin really made it an experience to listen to Bri battle in the ring.
Overall, I enjoyed this book. I did not like it as much as THUG but it was still a great book. I gave it: