Review: A Woman is No Man 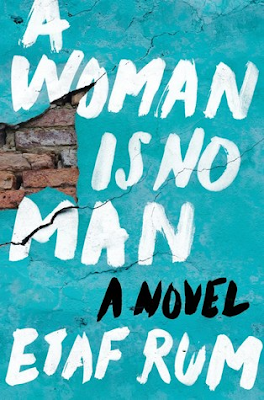 (Way overdue for this review...)
By Etaf Rum
*TBR book

In Brooklyn, eighteen-year-old Deya is starting to meet with suitors. Though she doesn’t want to get married, her grandparents give her no choice. History is repeating itself: Deya’s mother, Isra, also had no choice when she left Palestine as a teenager to marry Adam. Though Deya was raised to believe her parents died in a car accident, a secret note from a mysterious, yet familiar-looking woman makes Deya question everything she was told about her past. As the narrative alternates between the lives of Deya and Isra, she begins to understand the dark, complex secrets behind her community.

My thoughts: When I heard Etaf Rum's interview on NPR, I knew I had to get my hands on this book. My husband and I decided to read it together, and I am so glad we did. I went through so many emotions reading this book that it was great to experience them with my husband (and be able to discuss the book as we went through the roller coaster of emotions). I've read many mix reviews about this book: people love it or hate it (those that hate it think this book gives a negative stereotype of Arabs). How do I feel about this book? I absolutely loved it!
This was the heartbreaking story of Deya and her mother. Deya was trying to find a way to stop the arrange marriage that her grandmother was trying to organize. During her quest, she found clues about her mother. The chapters jumped back and forth between the characters: Deya, Isra (the mom), the grandmother, and the aunt. The jumping between the point-of-views of the characters was very well done. Each character's perspective gave revelations as to what was happening and added to the mystery of the story.
Now, I have to mention this because I was confused of the negative reviews on Goodreads: I don't see this book as being a negative representation of the Arab community. Deya even mentioned at the beginning of the book that her experiences were not like the experiences of other Arab families. What bothers me is how people tend to read a book with POC characters and think that it represents a whole group. We don't do this when we read a book with white characters. For instance, if I read a book that has abuse and white characters, I don't expect this to represent all white people. Do you get what I mean?
Okay...back to my thoughts on this book:
This book filled me with so many emotions! I was angry, sad, elated, and fearful. I loved how the characters grew in the book and realize that family is more important than pride. And the ending...I have not sobbed like that in a long time. I was completely heartbroken and left speechless. As I'm typing this, I can't help but get teary eyed even after months of reading this book.
Overall, this book touched me in many ways. I continue to think about it to this day and get all emotional thinking of Isra. I hope to re-read it again to see if I can get another perspective of the story, but I'll give myself some time to heal for now. I rate this book: