Review: The Beast Within 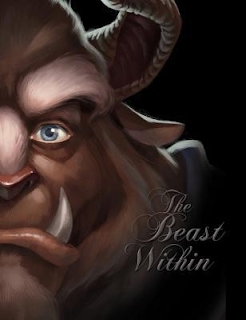 A cursed prince sits alone in a secluded castle.

Few have seen him, but those who claim they have say his hair is wild and nails are sharp--like a beast's! But how did this prince, once jovial and beloved by the people, come to be a reclusive and bitter monster? And is it possible that he can ever find true love and break the curse that has been placed upon him?

My Thoughts: So I decided to continue the Villains series. This second book in the bunch was better than the first one. The writing was better and the storytelling was more captivating. I really enjoyed the author's take on Disney's Beauty and the Beast.

In this story, the reader got to see the process of how the prince became the beast. The prince was arrogant and very vain. He thought himself the perfect male specimen which meant that he had to have most gorgeous girl around. Of course, this girl was not allowed to have any brains and must only have eyes for the prince. When he became cursed by the three sisters from the first book, the prince slowly turned to madness in trying to reverse the curse by believing only the girl was able to save him without changing his ways. It was sad to read how he tormented his poor fiancé for his own gain only to banish her. Yet again, this had to happen in order for the prince to fully turn into a beast.

What I enjoyed the most about this take was the role of Gaston. Gaston and the prince were best friends. A different side of Gaston was portrayed that worked for me. I also liked how the author explained the downfall of these two men's friendship.

I really liked the first two-thirds of the book. The last part felt a little rushed for me. I would have liked to have seen more of the beast's reaction to Gaston's fate after the spell was broken, especially when Gaston was an important person in the beast's/prince's life.

Overall, I really liked this book more than the first one. It makes me look forward to reading the rest of the series. I rate this: