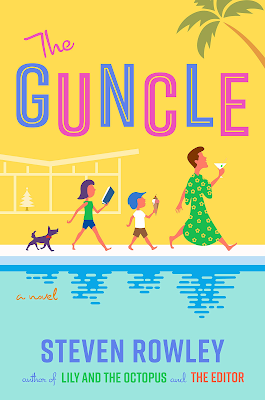 Patrick, or Gay Uncle Patrick (GUP, for short), has always loved his niece, Maisie, and nephew, Grant. That is, he loves spending time with them when they come out to Palm Springs for weeklong visits, or when he heads home to Connecticut for the holidays. But in terms of caretaking and relating to two children, no matter how adorable, Patrick is honestly a bit out of his league.

So when tragedy strikes and Maisie and Grant lose their mother and Patrick’s brother has a health crisis of his own, Patrick finds himself suddenly taking on the role of primary guardian. Despite having a set of “Guncle Rules” ready to go, Patrick has no idea what to expect, having spent years barely holding on after the loss of his great love, a somewhat-stalled career, and a lifestyle not-so-suited to a six- and a nine-year-old. Quickly realizing that parenting—even if temporary—isn’t solved with treats and jokes, Patrick’s eyes are opened to a new sense of responsibility, and the realization that, sometimes, even being larger than life means you’re unfailingly human.

With the humor and heart we’ve come to expect from bestselling author Steven Rowley, The Guncle is a moving tribute to the power of love, patience, and family in even the most trying of times.

My thoughts: I absolutely loved this book! It had so many feels!!! It was heartwarming and sad at the same time.

This had great character development. We had Patrick, the main character. He was self-centered and was constantly pushing away people in his life. Patrick was in mourning after losing the love of his life but then his life spiraled more out of control after his dear friend past away. I completely felt for Patrick. He was annoying at first but his behavior was understandable after getting to know his character more. What I loved best was reading his growth in the story. He became more whole and was able to move forward with his life when he was forced to take in his nephew and niece for the summer.

Now the children: Grant and Maisie. They were such sweethearts! My heart ached for them for the loss of their mother but I was happy to read how resilient they were as they had to spend their summer with their gay uncle (guncle) Patrick. Though they were there in Palm Springs with Patrick to help him move forward with his grief, the children also needed their uncle. Ay! My heart completely went out for all three characters!

The story centered around the theme of grief and moving forward in life. The silly and loving things that the characters said throughout the book had me smiling and crying. I just wanted to give everyone a big hug.

This book now holds a special place in my heart. I am looking forward in reading more from this author. I rate it: