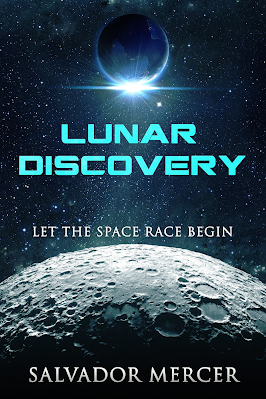 What lies on the dark side of the moon could change the course of humanity forever.

When a Chinese rover discovers an alien technology on the dark side of the moon, it is up to Richard 'Rock' Crandon and his NASA team of scientists and engineers to devise a way to return before the Chinese and Russians.

Forced to deal with bureaucratic oversight and a complex team of personalities, Rock Crandon pushes his team to their limits.

With pressure mounting, the world is pushed closer to conflict and war as the NASA team finds itself seriously behind in the newly initiated space race. The future of mankind, its ideological and technological advances are at stake, as the world's super powers race to discover what lies on the dark side of the moon.

Who will get there first, and at what cost?

My thoughts: What happens when we get an alien signal coming from the dark side of the moon? This was an exciting adventure! I randomly picked this book to read on my eReader during camping with my husband. I needed a scifi story to keep my husband hooked. Little did I know that I too was going to be enthralled with the story.
The plot was thrilling and suspenseful. At first, it reminded me of the movie, Contact, with the whole signal thing that NASA received. But the comparisons ended there. The race between the nations US, Russia, and China had me at the edge of my seat. My husband and I kept debating who was going to get to the moon first but of course we knew that the US would had to prevail somehow.
The story was heavily dialogued driven but it ran smoothly. I could easily see this becoming a film. This also meant that it had many characters. The characters were realistic and likeable, no matter what nation they came from.
As a whole, I highly enjoyed this read. It was not perfect because it did have many editing errors. However, this did not stop us from enjoying the book. We rate it: