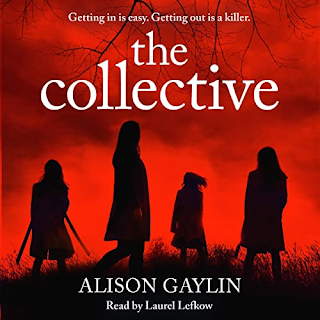 How far would a mother go to right a wrong?

Camille Gardner is a grieving and angry mother who, fives years after her daughter's death, is obsessed with the man she believes to be responsible.

A group of women who enact revenge on those who have taken their children.

But as Camille gets more involved in the group she must decide whether these women are the heroes or the villains.

And if she chooses wrong, will she ever get out alive?

My thoughts: This was not what I was expecting. I heard so much about this book but at the same time I had no idea what it was really about. After reading the synopsis of it, I knew that I should give the audiobook a try.

The story centered around Camille who was trying to get vengeance for her daughter's murder. The man she thought who committed the crime was let go due to his rich influential family. Camille was angry and in so much pain. But then the Collective found her and things went crazy from there.

It was sad to hear about Camille's daughter's case but it was realistic. Too many rich (mostly white) men get light sentences or none at all due to their statuses. The victim is usually portrayed as the one who did wrong. In this book, Camille's daughter was portrayed by the court as a wild girl who was just asking to be raped and left to die. So I completely understood Camille's anger and obsession to get justice.

The Collective was a VERY interesting organization. It had me wondering as to how it was organized, how it was created, and how they were able to get away with everything without a trace.

And I have to say...I was not expecting the ending. It was surprising but perhaps the only part of the book that I questioned a lot. It was a bit unrealistic for me.

The narrator, Laurel Lefkow, did a fantastic job in reading the story. She had great tone and pace. Her reading really brought the story to life, which kept me hooked from beginning to end. I really liked how she was able to capture Camille's character throughout the book.

Overall, this was a great book. The ending was unexpected and the story had me hooked. I highly enjoyed the narrator. I rate it: