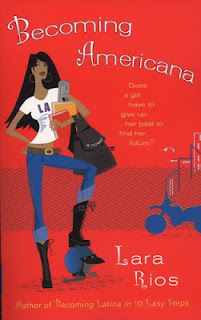 Synopsis: Ever since an article about Lupe Perez ran in the UCLA paper, she's become the poster child for the American Dream: East L.A. bad girl who slashed cop makes good! She goes to school full-time, works in the food court, and volunteers at a center for at-risk teens. Against all odds, Lupe has turned her life around. The thing is, she never asked for all this attention. Now, her professor wants her to write a gigantic thesis about what Americanization means to Mexican immigrants-and she's not even sure yet what it means to her.

My thoughts: *sigh* Lara Rios had done it again. She engrossed me into her novel, made me fall in love with her characters, and had made me question my identity. I fell in love with the first book Becoming Latina in 10 Easy Steps a few years back and I did not believe that Becoming Americana would be as good as the first. Boy, I was proven wrong.

This book centered with the feisty character that we met in the first one, Lupe Perez. Lupe was no longer the barrio girl who always broke the law, but a girl who was trying to better her life by getting her education at UCLA and by trying to help others who were in the same situation as she was.

At first, Lupe's character got on my nerves but she slowly grew on to me to the point that I now admire her. In the beginning, she was very set in getting rid of her "Mexicaness" so she could be American. It bothered me to read that Lupe kept saying that being Mexican meant being in the barrio (the ghetto), being an outlaw, and having no hopes in bettering themselves. I kept wanting to yell at her that not all Mexicans are like that. I understood what she was trying to say because that was what she grew up on, but what she was actually trying to get rid of was her "barrioness" not her "Mexicaness." Luckily, Lupe soon came to learn that being Mexican was not too bad and that being American does not mean leaving behind your past.

Every chapter began with a quote from Lupe's thesis and all of these were great. In fact, the book was covered with really great quotes. I found myself (just like with the first book) writing in the book, underlining sentences, and writing on Post-its. Throughout the book I questioned myself on, what DOES it mean to be American? There are so many cultures in the United States that it's really hard to define what makes an American. 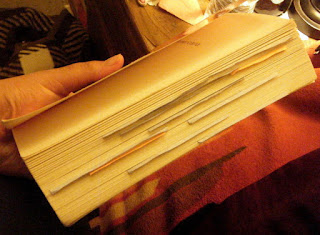 At first I was not as enamored with this book as I was with the first one. Yes, some of the quotes and Lupe's experiences connected to my real life yet I did not find myself loving every page of it. Then I slowly came into realization on how much the book impacted me. Unlike the first one, I was angered with some of the stereotypical sayings that were in the book and the inaccuracy of Mexican culture. I found myself constantly stopping myself reading the book because I had to give myself time to think of what I just read and write notes about it. It wasn't until the end when I found myself crying that I realized how much I really liked this book. Yeah...it's complicated.

What I'm trying to say in a nutshell is that Becoming Americana is great book. It is filled with many insightful thoughts that are told in a story that many people could connect to. I rate this: