Audiobook & Book-to-Movie: Island of the Blue Dolphins by Scot O'Dell 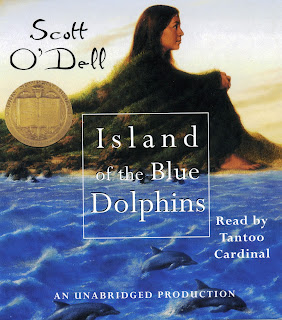 Synopsis: The Newberry Medal-winning story of a 12-year old girl who lives alone on a Pacific island after she leaps from a rescue ship. Isolated on the island for eighteen years, Karana forages for food, builds weapons to fight predators, clothes herself in a cormorant feathered skirt, and finds strength and peace in her seclusion. A classic tale of discovery and solitude returns to Houghton Mifflin Harcourt for its 50th anniversary, with a new introduction by Lois Lowry.

My thoughts: Before listening to the audiobook, I've attempted to read this book twice but never had the chance to finish it. The first time was back when I was in elementary school but I do not recall my class getting more than halfway with the book. The second time was this year with my fourth grade class. With all chaotic activities that was happening, we only got to halfway as well. I was determined to get this book completely read but was only able to do so as an audio.

I was fascinated to learn about a young girl who had to survive many years all by herself in a deserted island. Karana was strong, courageous, and smart. She would have left with her tribe but decided to sacrifice her fate with them by jumping off the boat to go and rescue her younger brother. Unfortunately, her brother met an awful end, which left Karana all by herself on the island. Karana had to learn how to fetch food on her own, build shelter, and keep herself sane with the company of wild animals. The book gave clues that Karana stayed on the island alone for many years.

What I found most amazing towards the end was that this story was based on a true person. Karana was based on a woman named Juana Maria who was abandoned on an island for eighteen years. I'm not sure how much of Karana's story was true to Juana Maria's but I cannot imagine surviving on my own for more than a decade.

Thoughts on the performance: The wonderful Tantoo Cardinal narrated this classic story. I will admit though that at first I thought Tantoo was too mature to portray Karana's character. Also, I thought that she was a bit boring in the beginning because her voice started off very monotone. Luckily about halfway, I could envision Tantoo as Karana and Tantoo showed more emotions as she read the story. It became more enjoyable.

Altogether, I was not disappointed with this audio. I am happy that I finally got the chance to finish this classic and I am happy to add more to my knowledge about an amazing woman that existed. I rate this audiobook: 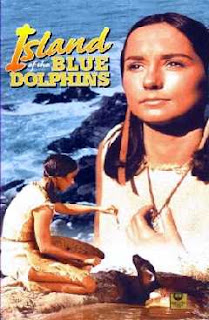 The 1964 film adaptation of the book was decent. Though it's sometimes seen as outdated, the movie did try to stay true to the book.
Celia Kaye played Karana's character. Her acting was not fantastic but she was still able to give some essence as to who Karana was. One thing that did bothered me about the actress was that her Missouri accent came out. She did not sound like she was a Native American. Other than that, she was still enjoyable to watch.
The movie did have a great location to show where the story took place, but it did needed a few more things to bring the story more to life. For one, it was hard to tell exactly how much time had passed on the island. Karana looked the same from beginning to the end of the movie. The only way we knew that more than a year had passed was the growth of one of the dogs towards the end. Can fault the movie too much though; it's very strange when a movie stays true to the book one hundred percent.
Overall, this was not the best movie but it was still enjoyable. I rate it:
3 stars
Posted by Vonnie at 9:49 PM