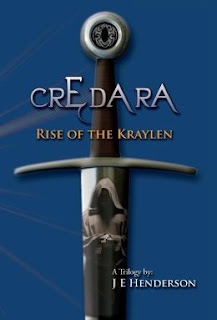 After the Kraylen, fallen angels cast out of Heaven after the Great War, rise up against God and mankind for revenge, a reluctant young monk learns that not only is he God’s chosen warrior, but discovers that the leader of the Kraylen uprising brutally murdered his entire family during his youth. Now, he must grow beyond his seething anger and his desire for vengeance and into the warrior he was destined to be. While harnessing the immense power of the Credara, he must lead a Godly army to defeat God’s purest enemy, and save mankind from a fate worse than death.


My Thoughts: This was an adventurous Christian fantasy book. The idea of a battle between good versus evil with angels and demons intrigued me. I couldn't wait to get started.

I very much enjoyed reading about the ancient tale of the angels that fell from Heaven. I liked how Henderson was able to weave this Biblical story into his fascinating fictitious tale. His mastery skills of description helped me picture the world he created and vividly helped me picture what the angels and demons looked like. Henderson also did a fabulous job in illustrating the battles. It was very scary to read about what happened to the Angel of Death for the idea of no death on earth made me shudder.

This Biblical tale was interwoven with the story of Agean. Agean was a very rounded character who showed growth as the plot progressed. He was not aware that he was chosen to be a warrior of God. In the beginning, Agean was a very immature character who didn't take responsibility. At first, his character got on my nerves. However, after learning where Agean came from and after seeing his personal growth, my feelings towards him changed for the positive. I ended up enjoying his character towards the end.

As much as I enjoyed this book, I could not give it a five star rating. Though this was an easy read, there were parts in the middle that were too slow for me. This first book in the trilogy concentrated a lot on how Agean gathered the warriors to fight against the demons. I did enjoy learning the backstory of the other characters, but I would have much preferred to have been a bit shorter. I was too anxious to get to the part of the battle between the demons. Other than this flaw, this was an engrossing read.

To sum up, Credara: Rise of the Kraylen was a captivating book. If you like reading about battles between good versus evil and reading about Biblical events, then this is the right book for you. The ending left me with my mouth hanging, which has me excited for the next book in the trilogy. I rate it: 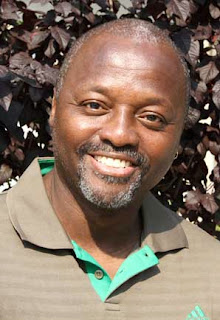 About the Author:
Brother of actress Tempestt Bledsoe of “The Cosby Show” fame, J E Henderson grew up in Chicago with a family that supported the arts. In 1983, he decided to pursue his own creative endeavors with a move to California, where his hobbies of songwriting, television and screenplay writing came to fruition. After founding Arc-Pen Publishing. J E put pen to paper and CREDARA: Rise of the Kraylen was born. J E lives in Los Angeles.
Twitter * Blog * Goodreads * Website *
Posted by Vonnie at 3:12 PM