Audiobook: Me and Earl and the Dying Girl by Jesse Andrews

Okay...I actually finished listening to this a couple of weeks ago. I am now barely getting to the review...lol 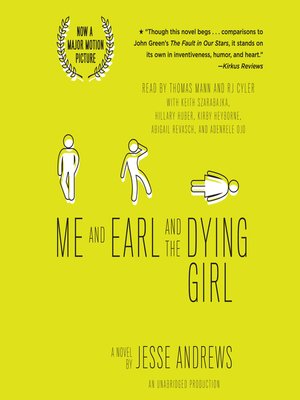 Up until senior year, Greg has maintained total social invisibility. He only has one friend, Earl, and together they spend their time-when not playing video games and avoiding Earl's terrifying brothers- making movies, their own versions of Coppola and Herzog cult classics. Greg would be the first one to tell you his movies are f*@$ing terrible, but he and Earl don't make them for other people. Until Rachel.

Rachel has leukemia, and Greg's mom gets the genius idea that Greg should befriend her. Against his better judgment and despite his extreme awkwardness, he does. When Rachel decides to stop treatment, Greg and Earl must abandon invisibility and make a stand. It's a hilarious, outrageous, and truthful look at death and high school by a prodigiously talented debut author.


My thoughts: This book had been calling out to me since it first came out. I tried to ignore it because I did not want to read another YA book filled with teenage angst and other teenage silliness. When my book group decided to vote for it as a book-of-the-month a few months ago, I still did not want to read it until I stumbled upon the audio version available on Overdrive. I tend to enjoy listening to books that are easy, fast, and silly reads because I don't have to focus too hard to keep up with the story. I knew that Me and Earl and the Dying Girl will be one of those books, thus I checked out the audiobook.

Being a young adult book, this book sure had some colorful language. Not only did Greg and Earl cussed a lot, but they also talked about many inappropriate things. I was surprised that this book would even be considered a YA book because of it. I do have to admit, though, I found myself laughing many times because of the language. It was shocking and absolutely absurd.

Now, when it came to the story, I found myself not being too impressed. Greg did warn people at the beginning of the book that this was an absolute horrible book and that no one should read it. Of course, this only peaked my interest to continue listening to the story. What I did like about the story was Greg's development from beginning to end. Though he still remained a jerk, he was able to get out of his shell and strive for bigger things. What I disliked about the story was how unimportant Rachel, the girl dying from cancer, appeared to be. Even the whole ordeal with cancer was not a big deal in the story. This book mostly centered around Greg surviving high school, with occasional scene developments of Earl.

Next, there were more than two readers for this audio production. It wasn't until I was more than halfway with listening to the audio that I realized that there were seven readers, and that was only because I decided to read the cover page of the audio. I did not catch the voice distinctions between the narrators. However, they still did a good job in capturing the essence of the characters. My favorite had to be listening to Earl's part only because the reader for him was hilarious.

Overall, this was a decent production. I was not too impressed with the story but I was still able to enjoy it all the way to the end. I rate it: