Review: Harry Potter and the Half-Blood Prince by J.K. Rowling 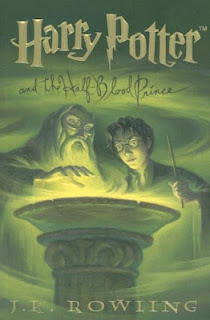 Synopsis: The war against Voldemort is not going well; even the Muggles have been affected. Dumbledore is absent from Hogwarts for long stretches of time, and the Order of the Phoenix has already suffered losses.

And yet...as with all wars, life goes on. Sixth-year students learn to Apparate. Teenagers flirt and fight and fall in love. Harry receives some extraordinary help in Potions from the mysterious Half-Blood Prince. And with Dumbledore's guidance, he seeks out the full, complex story of the boy who became Lord Voldemort--and thus finds what may be his only vulnerability.

My thoughts: Okay...this book took me a lot longer to finish reading than what I was expecting and a lot of it was because I had a harder time getting into theit. Yes, this book is mature and speaks more to an older audience but there wasn't enough conflict. Three-fourths of the book was about explanations and only the last third did it have any action. I do understand why Rowling took the time to explain the characters more instead of developing the conflict but some of it was dull for me.

Other than that, I did enjoy reading this sixth book in the series. Like I said before I liked the fact that Rowling gave the reader more in depth descriptions on the characters. I got to learn more about Dumbledore and Voldemort and how all of this "prophecy" starte. Further, I adore the fact how the love between Ron and Hermione grew as well as Harry's and Ginny's. I also appreciate how Rowling is able to show how our main characters are growing up into adults. This book has great character development.

Once the action started happening, I was completely put at the edge of my seat (even though I've already seen the movie). The description of the cave where Harry and Dumbledore go to look for the Holcrux was creepy. Next, when Dumbledore gets cornered in the tower, this scene had my heart thumping. Also, I have to admit, when Hagrid's cabin is caught on fire and his dog was still in there, I cried out (I think I was more worried about the dog than the other characters lol). I won't say anymore so I won't spoil anything else to those who haven't read it. All I have to say is that the way this book ended was done very well.

Overall, I enjoyed this book even if there were certain parts that I was not too into. I give this: