Review: The Taking by Erin McCarthy 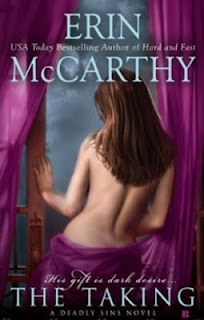 Synopsis: Heiress Regan Henry knows that passion can be an illusion, and she keeps her emotions in check-until she falls under the spell of the beguiling Felix LeBlanc. He knows that the rumors that her mansion is haunted are true, and that he's the only one who can save her from the spirits residing there. But the only way he can do it is to sacrifice his last chance at redemption...or risk a love that could consign them both to an eternity of evil.

My Thoughts: This is the third (and final book so far) in the Seven Deadly Sins series. I've read the first two books years ago and I remember enjoying them tremendously. The Taking was written well and is perhaps my favorite from the series.

In just around 289 pages, the few characters are introduced and developed. Regan is dying to get away from her cold-hearted husband and wants to get the chance to be independent and experience her passions without any guilt. Felix is the damned voodoo master who is over 100 years old who is looking for love and freedom. These two characters balanced each other perfectly and their chemistry between them was quite steamy!

Next, the storyline was very interesting. It had both scary and romantic elements. The house that Regan moves into is haunted by the spirit of a young woman who met an unfortunate death. There were parts that I felt a little spooked out when ghost will appear. Also, the innocent love between Felix and Regan and the immediate sexual attraction between them had me sighing. I was quite entertained with how the story was developed.

The only complain that I have of this book is that it's too short. I did enjoy the fact that it was a fast read, which I needed at the moment, but the story was too good that I wanted it to keep going. This book would have been perfect if everything was expanded more.

Overall, this was a great read and it makes me sad that there are no other books that continue the series.