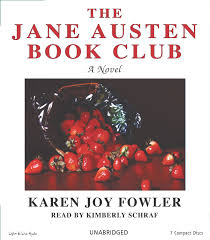 
Synopsis: Six Californians join to discuss Jane Austen's novels. Over the six months they meet, marriages are tested, affairs begin, unsuitable arrangements become suitable, and love happens. With her finely sighted eye for the frailties of human behavior and her finely tuned ear for the absurdities of social intercourse, Fowler has never been wittier nor her characters more appealing. The result is a delicious dissection of modern relationships.

My Thoughts: I saw the movie first many years ago and quite enjoyed it. In fact, the movie encouraged me to try to read Jane Austen books.  Thinking that the books are better then the movies, I thought The Jane Austen Book Club was going to be a delightful read.  Well, I was proven wrong.

The concept of the book sounded great, but was not executed well. Each character was in charge of a Jane Austen book, and somehow each character's lives was supposed to be represented by that book. The connections to Jane Austen's books to the characters were very vague and didn't really mentioned Jane Austen. The book concentrated on the disruptive lives of these characters that I just didn't really care for much. The lives that were interesting were not delved into more, and the ones that didn't make much impact on the book were the ones that were the main focus. I guess I was expecting the movie when listening to this book.

My thoughts on the performance: Kimberly Schraf did a good job in narrating the story. She knew where to put emphasis in her voice and made the story be more bearable for me. If I weren't listening to the audio, I think I would have dropped this book after a few pages in. Schraf made TJABC sound a bit interesting.

To sum up, I was expecting more with this book. There were a few parts that I found interesting and I enjoyed the few times that Jane Austen was mentioned along with her books, but these were too few for me to fully like this book. I rate it: