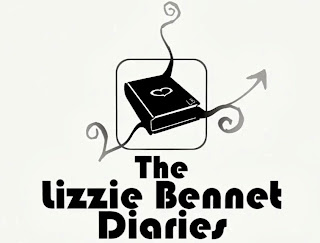 This web series was recommended to me by a good friend of mine who saw that I was slowly becoming obsessed with P&P. At first, I was not too eager to watch it because I've already seen a few adaptations of Jane Austen's novel (yes, you can egg me) and thought that it would not be any different. Also, I was not too fond of the idea of watching a web series. Luckily, I gave it a chance because I became hooked. I came to love this web series!

Each episode was about 2-9 minutes long, which made each story quick and fun to watch. It was also amazing to see how all of the plot was pulled off in front of Lizzie's camera.
Characters: I loved the characters and how diverse they were. Lizzie was the independent one but who liked to over-dramatize her life when representing day to day events. Jane was the sweet and caring oldest sister who worked in the fashion industry. Then we had Charlotte, Bing Lee, and Caroline Lee represented by three Asian actors. They were great. I loved the diversity. Finally, there was William Darcy. He was one of the last characters to appear in the series and it was a huge deal when his face was finally shown.

As much as I enjoyed these characters, I only had two who were my favorites: Lydia and Mr. Collins. Lydia Bennet was still the annoying and very energetic little sister who always got into trouble. Her character developed as the story progressed to become more mature towards the end. Next there was Ricky Collins. His character was a riot! He stayed true to the book’s character. Ricky was constantly talking with too many words and was too busy making himself be the focus of every conversation.

Overall thoughts: This show had me laughing many times and even made me cry a couple of times. I laughed with the "costume theater" and  cried when Lydia had her meltdown. Though it only took me three days to watch the series, I teared up at the thought that the show was over. I knew the story of Pride and Prejudice had an end but I didn’t want The Lizzie Bennet Diaries to end. This was a wonderful web series that I am absolutely glad that I took the advice to watch it. I rate it: