This tour stop contains my review for the sequel to Blood Purple. Warning, there are slight spoilers. If you would like to read my review of the first book, then you can click here. 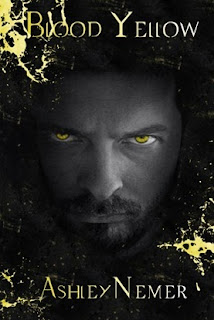 The lines are drawn, and Zayn and Nikole must face each other in a battle of forgiveness and power; each attempting to right their wrongs, each battling their own inner demons. Haydar and Leigh prepare for war, rounding their men and setting into motion courses that cannot be undone. The tales will fall in line as the four of them come face to face with each other, and they will watch loved ones perish. When the dust settles and dawn breaks, who's going to be left standing and who will be missing? Will Nikole forgive Zayn for his betrayal? Will Leigh and Haydar overcome their differences? Will Adara say yes? Blood Yellow...Because the stories only just begun....

My Thoughts: With so many vampire fiction out there, one can get tired of the unoriginal works and simply give up on these mythical creatures. So what made Blood Yellow unique for me? It was about Arabic vampires. That's right, Arabic vampires. This fact about the book was what had me reading the first one, Blood Purple, and I found myself captivated by it. I was looking forward to reading this next book because I really wanted to know what was going to happen to the characters, especially Zayn, with the way things ended in the first book. Though unexpected things happened that I was not too thrilled about, I found myself devouring the book in one night.

The story had me gripping my e-reader. It continued right after where the first book ended. The first chapter was intense with how Zayn was reacting to his sister and lover leaving. The next chapter then jumped to three months in the future where we came to learn that Zayn disappeared leaving his sister Nikole in charge. There were violent scenes and there were love scenes. Some of the love scenes, especially the bickering between Zayn and whoever he was with, seemed unnecessary. The parts with the villains though was great; in fact, it was a little sickening on how graphic it was. It was obvious that Ms. Nemer's writing improved as the scenes flowed smoothly and how intricate the details were.

In this sequel, the characters were more developed. Zayn showed his weakness and his true self in the way he reacted to things. Nikole proved how strong and intelligent she was even though she suffered a very traumatic event in the first book. Then there was Alec, the vampire that rescued Nikole and became her lover. We come to learn more about his past and we come to shed a few tears for him when reading his fate towards the end. I grew to love Nasir more in this book. He was the father figure for Nikole and Zayn and he was the level-headed one. I wanted to give Nasir a high-five when he put Zayn in his place. Lastly, my favorite character had to be Leigh, the villain. She was beautiful, smart, and very deadly. Though my stomach turned when I read her scenes of torturing others, I couldn't help but admire her strong will to try to accomplish her goals and just how sadistic she was. I mostly enjoyed all of the characters except for one.

Zayn was my least favorite character even though he was the main star in this book. I liked him in the first book and I even felt some sympathy towards him when things started going downhill for him. However, in this book I found myself feeling very irritated by him. He overreacted to everything, wouldn't take responsibility, was a chauvinistic pig, and was a coward. I had to stop reading a few times because I found myself fuming because of his actions. I just couldn't believe that a vampire king who's been alive for hundreds of years would act this way. Fortunately, his actions were not excused. Ms. Nemer made it apparent that the way he acted was plain childish with having Nasir stand up to Zayn. He did redeemed himself a little towards the end though.

To sum up, this sequel was worth the wait even if Zayn disappointed me. I was impressed with Ashley Nemer's improvement of her writing and I found the scenes to be engrossing. I can't wait for the next book because this one ended with a big cliff-hanger. I rate it:

Ashley was born in Wichita, Kansas. She is the eldest of three. She has two brothers who she completely adores and who were the inspiration for her Alpha Lead Zayn. She has always enjoyed writing and using her creativity. This started at a young age in Kansas City, Missouri.

Over the course of 15 years Ashley’s skills as a writer have dramatically changed. During college she used to write poetry when she was sad or down, needing an outlet to safely express what was on her mind. Since then, her poetry has taken a dive into a dark undertone. She writes about the pain of love and paints them with dark pictures of expression. She isn’t afraid to show the thoughts we all have but are too timid and/or shy to say.

Ashley’s first novel, Blood Purple is based on Algula vampires who dwelled in the Middle East and were forced from their home. The idea for this series spurred from one evening of Ashley researching her nationality after talking with her Aunt Pam about where her family originated. She and one of her friends did research on the folklore of that part of the world and found there was very little information about the paranormal genre and how it tied into the Middle East. Ashley took this idea and ran with it.