This wraps-up our read-along for Shadow and Bone! I had a great time doing this with Maria over at A Night's Dream of Books. I love being able to read a book with someone and having the chance to discuss it together. For this wrap-up, I am posting my review on this book. 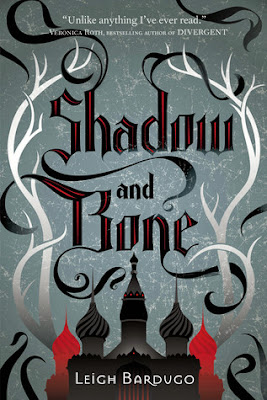 Surrounded by enemies, the once-great nation of Ravka has been torn in two by the Shadow Fold, a swath of near impenetrable darkness crawling with monsters who feast on human flesh. Now its fate may rest on the shoulders of one lonely refugee.


Alina Starkov has never been good at anything. But when her regiment is attacked on the Fold and her best friend is brutally injured, Alina reveals a dormant power that saves his life—a power that could be the key to setting her war-ravaged country free. Wrenched from everything she knows, Alina is whisked away to the royal court to be trained as a member of the Grisha, the magical elite led by the mysterious Darkling.


Yet nothing in this lavish world is what it seems. With darkness looming and an entire kingdom depending on her untamed power, Alina will have to confront the secrets of the Grisha . . . and the secrets of her heart.

My thoughts: I bought myself this book for my birthday last year because the premise and the book cover caught my attention. I couldn't wait to read it because I felt that I would fall in love with it. I was glad to have finally been able to read it because it was a good book. I didn't love it like I was expecting, but I quite enjoyed it.

It was very interesting to read the world that Leigh Bardugo created in Shadow and Bone. From the Fold were creatures such as the volcra flew around killing people to the Little Palace where all of the Grisha were portrayed as beautiful and powerful, I was able to visualize the kind of world the main character lived in. I will admit that I found myself a little confused at first with all of the magical descriptions, the made-up words, and the Russian words that were in it. Once I got used to it, I was able to appreciate the details that described this world.

The characters were quite likeable. The main character Alina started off unsure of herself and a little weak. As the story progressed, Alina grew into a more confident, stronger woman who was able to stand up to the man she found herself attracted to. She was a character that I found quite believable. Next, there was Alina's best friend Mal. Mal was the dependable one until he and Alina were separated. Mal was Alina's love interest and he was described as a down-to-earth guy, but I did not fall for him. He did redeemed himself a bit for me towards the end but I felt that Alina could have done better. The character that I found myself liking the most was the Darkling. Throughout the book, it was hard to figure out whether or not the Darkling was a good guy or a bad guy. He was described to be a very attractive person and his mysterious personality really grabbed my attention. Though his true personality showed towards the end, I was still rooting for him. I guess I'm a sucker for bad boys.

In all, I found myself enjoying this book. I wanted to fall in love with it but there were a few elements that quite didn't settle for me: the confusion in the beginning and the romance between Mal and Alina. Other than that, I am looking forward to the second book in the series since I really want to know what will happen to Alina and the Darkling. I rate it: