Guess What's Coming Out?! The Trap by Andrew Fukuda! 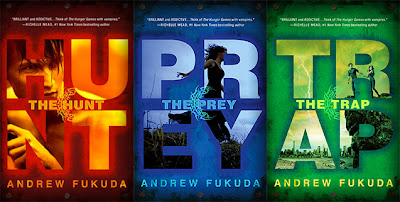 It's finally coming out: the third and final book in the Hunt Series by Andrew Fukuda! It's out November 5th!!! I am extremely excited for this book! I started reading the series earlier this year and was hooked. When I finished the second book, I had no idea that the third book wasn't out yet. I was frustrated because I really wanted to know more what would happen to Gene and Sissy. Now, I don't have to wait much longer. I can't wait for my copy to come in!!!

ABOUT THE TRAP: From author Andrew Fukuda comes The Trap, the explosive finale to The Hunt trilogy—perfect for fans of The Hunger Games!

After barely escaping the Mission alive, Gene and Sissy face an impossible task: staying alive long enough to stop an entire world bent on their destruction. Bound on a train heading into the unknown with the surviving Mission girls, Gene, Sissy, David, and Epap must stick together and use everything they have to protect each other and their only hope: the cure that will turn the blood-thirsty creatures around them into humans again. Now that they know how to reverse the virus, Gene and Sissy have one final chance to save those they love and create a better life for themselves. But as they struggle to get there, Gene's mission sets him on a crash course with Ashley June, his first love . . . and his deadliest enemy.

Born in Manhattan and raised in Hong Kong, Andrew Fukuda is half-Chinese, half-Japanese. After earning a bachelor’s degree in history from Cornell University, Fukuda worked in Manhattan’s Chinatown with the immigrant teen community. That experience led to the writing of Crossing, his debut novel that was selected by ALA Booklist as an Editor’s Choice, Top Ten First Novel, and Top Ten Crime Novel in 2010. His second novel, The Hunt, the first in a new series, was bought at auction by St. Martin’s Press and will be published in May 2012. Before becoming a full time writer, Fukuda was a criminal prosecutor for seven years. He currently resides on Long Island, New York, with his family.


To learn more, visit him online at:


Make sure you get your copy!
Posted by Vonnie at 9:50 PM