I would like to present a debut novel from Katarina West:

It is a Fantasy/Psychological Drama with a mixture of literature fiction and magical realism,
set in the fashion world.

So far, it's available as an ebook but it will soon come out into print!

Oscar Pellegrini is a talented fashion designer with a deadly enemy: his own critical mind. He destroys much of what he designs and has been drifting for years, gradually retreating from the fashion business he loves but holding on to his dreams of success.

A chance meeting with a former girlfriend triggers a creative crisis so deep that Oscar escapes to Russia, where he drinks and despairs like never before. Just when he thinks he has lost everything he discovers a magical machine that turns ordinary outfits into irresistible sartorial triumphs. Oscar takes the machine back to Italy – and before he knows it, he has become famous for his designs, and celebrities and socialites are fighting to be first to wear his gorgeous garments.

But the happily-ever-after ending for the fashion messiah turns into a nightmare when his dresses acquire a life of their own, gaining energy and evil as time goes on. Haunted by his creations, a dark secret he is no longer able to hide, Oscar finds himself fighting for his life and sanity, and searching for the answer to a question he never knew existed.

Is there such a thing as stolen genius, and if there is, can it turn against the very person who stole it?

(no date)
In the beginning was magic, and magic was all that there was. Before my longing for genius, before genius was invented, before fashion and Paris and black lace dinner gowns, magic was alive in the forests of the North. Before reason began to overshadow religion, before factory chimneys coloured city skylines in grime and charcoal grey, and steam trains puffed their way through honey-coloured fields and dark woodlands; before the Bastille was besieged, the Titanic sank, and the atom bomb was invented – yes, before much of anything, up there in the North, between the two seas, where the earth was arid, the days were short and people silent, magic ruled the world.

Two kingdoms flourished, Kalevala and Northland, one on the current Finnish-Russian border, the other on the snowy plains of Lapland, and their rivalry was the stuff of legend and romance, the kind that came into being by the crackling fire during long winter evenings, when the wind was howling in the corners.

Back then, everything was different. This was not the era of reality shows and low-cost flights, but of long-bearded wizards and heroic bards who sang their enemies into perdition, and instead of blogs and tweets you had spirits and spells of every imaginable variety, and all the other makings of a timeless epic: adventures, battles, kidnappings, bloody weddings.

In the heart of this shamanistic set-up stood not a king or a warrior, or a princess with the face of Helen of Troy and the rump of Jennifer Lopez, or a great dark force whose name couldn’t even be uttered. No, the leading role belonged to a magic mill so formidable that it was something not of this world, something mankind had never seen before.

Its name was Sampo and it was the talisman of talismans, because somehow it made money (or success, or whatever you wanted) out of nothing. All you had to do was to put an object inside it, and the Sampo was set in motion. After grinding your rubbish, after some wheezing and vibrating – and some hocus-pocus and abracadabra – and a concluding thud, it spit your milk and honey out, like a cash dispenser gone crazy, so that whoever possessed it was the richest, most powerful and goddam luckiest person in the world.

Everyone coveted it. Nations and heroes perished because of it.

Years passed, metamorphosing into decades and centuries. Napoleon escaped from Elba and Darwin set off on his five-year voyage on the Beagle and Van Gogh cut his ear off, and the Bolsheviks shot their tsar, and millions died in the trenches, and Churchill, Stalin and Roosevelt shook hands in Yalta, and Dior dressed his women like lollipop-pink candies in wasp waists and stiffened skirts, and man set foot on the moon for the first time, and Elvis asked millions of women to love him tender, and life, in short, went on. Hardly anyone asked what had happened to the Sampo – even if in the villages of the North rumours circulated about it being hidden and forever lost to the modern world.

But the Sampo wasn’t lost. Up there in the cold, hidden in the shadowy silence of an old forest, behind the rocks and the ferns, perched the biggest jackpot of the bygone world, covered in moss, forgotten yet functioning, waiting for its taker. I have never believed in the power of magic – let alone stories, and much less folk stories coming from the back of beyond. But then the Sampo entered my life.

And that’s where my story begins.

It all began last month when I spotted a redheaded woman wearing a black dress in a boutique opening party in St. Petersburg, Russia, and that moment changed my life.

To the casual eye it was just a dress, and there was nothing visibly striking or particular in it. It was the quintessential little black dress, with an off-the-shoulder neckline, short cap sleeves and an ankle-length skirt.

Yet it took my breath away. I had never seen anything like it in my life before. There was something in it that went beyond ordinary craftsmanship and expertise, something unworldly and hypnotic, which couldn’t be described. And the most amazing thing was that it was shining, and its shine radiated all around, so that the woman wearing it was shining too, and her milky skin glowed as if her body was illuminated from within.

Spotting it, I became motionless. I felt butterflies in my stomach, and a pang of jealousy in my heart, for someone had created this outfit, and it hadn’t been me. I knew that I wouldn’t rest till I had touched it, turned it inside out, and unravelled its mystery.

That was one June evening a month ago, when it all began.

This is an interesting beginning that helps set up what the novel is going to be about. I like the whole mysterious tone that it has concerning magic and the amazing machine called the Sampo. It makes me wonder how the Sampo was created and what exactly it does to create things that will make people rich. Also, I enjoy the slight humor that it has when it was comparing the past and the present. It gives it a sense that this is a light read. However, the cover makes me think otherwise. It's probably a dark read. Either way, it sounds fascinating and I hope to read it soon! 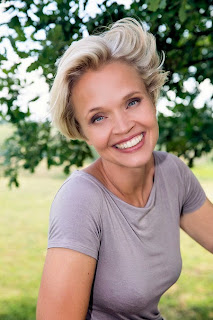 Katarina West was born in Helsinki, Finland, into a bilingual family that in addition to humans consisted of dogs, cats, horses, guinea pigs, canaries, rabbits and – thanks to her biology teacher mother – stuffed owls and squirrels.

She spent time traveling in Africa, Asia and Latin America, and went on to study at Queen Mary and Westfield College in London and the European University Institute in Florence, where she completed a PhD in political science and published a book based on it, Agents of Altruism. During those student years she started work as a journalist, and continued writing for various Finnish magazines and newspapers for over ten years, writing on various topics from current events and humanitarian issues to celebrity interviews and short stories. She also briefly worked as a university lecturer on humanitarian issues in Northern Italy.

Katarina lives in an old farmhouse in Chianti with her husband and son and when not writing, she is fully immersed in Tuscan country life, from jam-making and olive-picking to tractor maintenance.

Witchcraft Couture is her first novel and, unlike the unearthly clothes in its pages, her outfits are not shining.