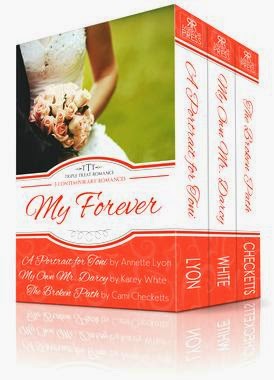 Get it on Amazon


A PORTRAIT FOR TONI by Amazon bestselling author Annette Lyon

Toni has no idea what she’d do without her best friend, Carter. Who else would she be able to vent to about her parents, her job at the dance studio, or her latest relationship woes? That is, until he starts questioning Toni, saying he thinks she has an eating disorder. Then she starts dating Clint, and somehow that puts a deeper wedge between her and Carter. When she’s hospitalized after an on-stage collapse, and Carter stupidly starts in with advice about food and weight, she sends him away. One night after a performance, Toni tries to mend the hurt between them. Instead of finding Carter, she stumbles onto proof that he has feelings for her that go way beyond those of a friend. Toni is left with the very real prospect of losing Carter forever, unless somehow she can return his feelings—but that’s impossible. Isn’t it?

My thoughts: I was not prepared for the various emotions that assaulted me while reading this book. I went from being irritated, to angry, to sad, and to happy. It dealt with a serious topic that became the main focus but I still loved how love prevailed even though there was a set back. While reading it, I thought at first that I was not going to like it but I found myself loving it towards the end. I rated it: 4.5 stars

After being dragged to the 2005 movie Pride and Prejudice by her mother, sixteen-year-old Elizabeth’s life changes when Matthew Macfadyen’s Mr. Darcy appears on the screen. Lizzie makes a promise to herself that she will settle for nothing less than her own Mr. Darcy. During the six intervening years, she finds all of her suitors lacking—they just aren’t Mr. Darcy enough. Coerced by her roommate, Elizabeth agrees to give the next interested guy ten dates before she dumps him. She starts dating Chad, but she believes her dream comes true in the form of wealthy bookstore owner Matt Dawson, who looks and acts like her Mr. Darcy. But as Elizabeth simultaneously dates a regular guy and the dazzling Mr. Dawson, she’s forced to re-evaluate what it was she loved about Mr. Darcy in the first place.

My Thoughts: I read this one back in 2013 for a tour and I fell in love with it. It is my favorite from the box set. Being a big fan of Pride and Prejudice, My Own Mr. Darcy was a huge treat. I loved how the main character Lizzie was determined to find her own Mr. Darcy, but soon came to learn that sometimes what we think we want was not really what we desired. This book would sure be a re-read for me sometime in the future. I rated it: 5 stars.

Injured in a debilitating accident at age six, Ethan Searle believes women eye him with a mixture of pity and disdain. He’s tried love before. He won’t again. He meets his match in a precocious two-year old who loves him despite his disability, even while her mother seems bothered by everything about Ethan. Autumn Reader escaped her abusive marriage with her beautiful daughter and a stack of fear. She can’t make the mistake of trusting a man again. Autumn’s daughter becomes enraptured by Ethan. Despite Autumn’s best intentions, she finds herself following her daughter’s example. When her ex-husband reappears, threatening everyone she loves if she won’t submit to his demands, Autumn has to learn to trust or lose her chance at real love.

My Thoughts: I recently finished this one. I was captivated at the unusual love story because of the male hero in this book. I was glad to have been able to read a book that gave people with disabilities a chance for love. It was unique and lovable, but not perfect. I do highly recommend it to help change someone's perspective when it comes to true love. I rated it: 3.5 stars.

As a whole, I highly enjoy this box set. It contained three completely different stories but they were all great. This is an awesome deal for anyone who adores clean love stories.

Karey White grew up in Utah, Idaho, Oregon, and Missouri. She attended Ricks College and Brigham Young University. Her first novel, Gifted, was a Whitney Award Finalist. She loves to travel, read, bake treats, and spend time with family and friends. She and her husband are the parents of four great children. She teaches summer creative writing courses to young people and is currently working on her next book.

Cami Checketts is married and the proud mother of four future WWF champions. Sometimes between being a human horse, cleaning up magic potions, and driving boys to lacrosse practice, she gets the chance to write fiction.