By Amie Kaufman and Jay Kristoff 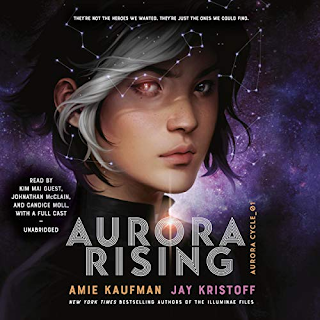 The year is 2380, and the graduating cadets of Aurora Academy are being assigned their first missions. Star pupil Tyler Jones is ready to recruit the squad of his dreams, but his own boneheaded heroism sees him stuck with the dregs nobody else in the Academy would touch…

A cocky diplomat with a black belt in sarcasm

A sociopath scientist with a fondness for shooting her bunkmates

A tomboy pilot who’s totally not into him, in case you were wondering

And Ty’s squad isn’t even his biggest problem—that’d be Aurora Jie-Lin O’Malley, the girl he’s just rescued from interdimensional space. Trapped in cryo-sleep for two centuries, Auri is a girl out of time and out of her depth. But she could be the catalyst that starts a war millions of years in the making, and Tyler’s squad of losers, discipline-cases and misfits might just be the last hope for the entire galaxy.

They're not the heroes we deserve. They're just the ones we could find. Nobody panic.

My thoughts:  The cover immediately grabbed my attention. The purple coloring was striking and the girl had a mysterious vibe. When I looked up this book, there were many positive reviews, which peaked my interest more.
The plot of this book was quite interesting. We had a girl named Aurora who was talking to her father via telecom. All of a sudden, a flash of bright light went off and the girl went into darkness.  Aurora awoken 200 years in the future in a spaceship. Aurora was baffled and began to seek answers. Trying to learn as to what happened to Aurora, what happened to her family, and what happened to the place Aurora was destined to visit was intriguing.
There were very many characters in this book and each chapter alternated between the characters' perspectives. Because the chapters jumped between point-of-views, I felt that the characters were not as fully developed as I would have liked. Many of them felt very shallow.  For example, the dialogue between characters was kind of cringe. It felt as if they were trying too hard to make some hilarious punchlines.  I think the book will have worked out better if it had less point-of-views.
What made reading this book an awesome experience was listening to the audio performance. There was a full cast of readers. Each character had its own narrator, which brought diversity to the voices. Also, there were some cool effects that helped make the story come alive, such auto tune to make the voices sound as if they were speaking through an intercom. It was pretty neat on how they performed the book.
Overall, this was a pretty decent book. I enjoyed the plot but I wished the characters were more developed. The audio production was excellent. It makes me curious to see if the rest of the books in the series are also done the same way. I rate this: