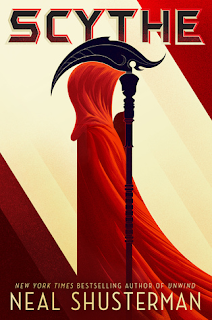 A world with no hunger, no disease, no war, no misery. Humanity has conquered all those things, and has even conquered death. Now scythes are the only ones who can end life—and they are commanded to do so, in order to keep the size of the population under control.

Citra and Rowan are chosen to apprentice to a scythe—a role that neither wants. These teens must master the “art” of taking life, knowing that the consequence of failure could mean losing their own.

My Thoughts: I love Neal Shusterman's books so I was excited to read Scythe. I was not too sure what to expect from this book (this is what happens when you don't read the synopsis) but I kept hearing good things about it. I'm glad that I finally read it because I enjoyed it tremendously.
The idea of a future where there is no disease, no natural death, war, or crime sounds too good to be true. Many people hope to find the cure to terrible diseases, such as cancer, but not many people think about the consequences of these cures. The population will definitely skyrocket and life will almost lose its meaning.  I was glad to read that these issues were mentioned in the book. However,  the solution of having scythes was pretty gruesome but understandable. The idea of training young people to become killers was barbaric, which made the story creepily exciting.
I quickly came to like the characters.  We had Citra who was brave and smart while we had Rowan who was shy but ended up becoming brave. Both teenagers were being trained to become the next scythe. The book had me wondering of who was going to be chosen. I thought I had an idea but then the twists happened. But I have to say, I was very glad to see how these two characters grew throughout the book.
I don't want to say too much without giving away the book. Let's just say that I highly enjoyed it. It's not my favorite Shusterman book because it did start off slow, but it ended up delivering at the end. I give it: