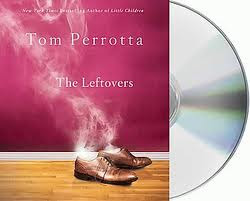 
"What if—whoosh, right now, with no explanation—a number of us simply vanished? Would some of us collapse? Would others of us go on, one foot in front of the other, as we did before the world turned upside down?

That’s what the bewildered citizens of Mapleton, who lost many of their neighbors, friends and lovers in the event known as the Sudden Departure, have to figure out. Because nothing has been the same since it happened—not marriages, not friendships, not even the relationships between parents and children.

Kevin Garvey, Mapleton’s new mayor, wants to speed up the healing process, to bring a sense of renewed hope and purpose to his traumatized community. Kevin’s own family has fallen apart in the wake of the disaster: his wife, Laurie, has left to join the Guilty Remnant, a homegrown cult whose members take a vow of silence; his son, Tom, is gone, too, dropping out of college to follow a sketchy prophet named Holy Wayne. Only Kevin’s teenaged daughter, Jill, remains, and she’s definitely not the sweet “A” student she used to be. Kevin wants to help her, but he’s distracted by his growing relationship with Nora Durst, a woman who lost her entire family on October 14th and is still reeling from the tragedy, even as she struggles to move beyond it and make a new start."

* * *
The premise of this story was quite interesting. What would happen if all of a sudden thousands of people disappeared all of a sudden around the world? How would I react if my whole family vanished in thin air and I was the only one behind? These questions were constantly in my mind when listening to this audio.

The book follows different characters on how they deal with the affects of the Sudden Departure. Out of all the stories, Nora's was the one that caught my attention the most. I felt sorry for her and just wanted the best for her. I was deeply glad for the way the book ended for Nora.

Though the book was full of crazy events and humorous moments, I did find myself having a hard time focusing. The reader did a wonderful job portraying the characters and narrating the story, but I did find myself being lulled to sleep. The constant change of characters did not help keep me focused either. Maybe this would have been best as a print book?