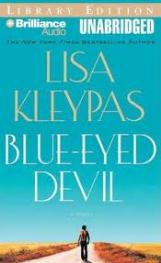 Haven Travis has always been rebellious. She really wants to marry her boyfriend Nick, but her father refuses to give his blessing because he believes Nick is only after Haven's money. Haven doesn't listen and believes that she's truly in love with Nick.

At her brother's wedding, Haven is distraught with the idea that her father won't accept her and Nick's relationship. She decides to surprise Nick in the cellar by sneaking behind him and kissing him. She soon realizes that it's not Nick but Hardy Cates, the family's enemy.

She tries to forget about Hardy,even though it sparked something while inside of her, and goes ahead and marries Nick. Soon she finds out that Nick is not the man she thought he was and her life soon becomes in danger.

Can she escape from Nick? Can Haven ever learn to love again? Can Hardy erase Haven's dark past?

* * *
This is the second book in the Travis series and I was really looking forward to it. I as somewhat disappointed with the first one because how Hardy's character changed in the book. In this book, I was able to fall in love with him again.

I was not too sure how to rate this book. My feelings were in complete chaos with the darkness of the story. It turns out that I love it. It's a very difficult read but it had me completely hooked and emotional throughout the story.

This is not a light read AT ALL. Haven suffers through something completely tragic and horrific that no other human being should ever go through: domestic abuse and rape. I do caution those that read it that Lisa Kleypas does not overshadow these scenes. In fact, they are pretty graphic.

It also did not help how well the reader played Haven's part. It felt that these horrible scenes were actually happening. I found myself in tears and completely distraught at times on what was going on. I even had to give myself breaks on how graphic these scenes were.

Though Blue-Eyed Devil does touch some very serious topics, it was well told. I loved Haven and how she becomes strong again. I love Hardy on how he turns back into his loveable selft that was introduced in the first half of the first book, Sugar Daddy. I especially loved how these two characters complimented each other.

Lisa Kleypas is a wonderful writer and is one of my favorites. I was completely surprised of the content of this book but I admire how Kleypas had the guts to write about it and turn it into a happy ending.