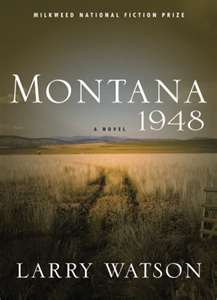 David Hayden would rather forget the year 1948; the year that changed his family. David recounts back to this year when he was 12 years old and remembers his beautiful Sioux housekeeper, Marie Little Soldier. Marie gets really sick and Wes and Gail, David’s parents, call on Uncle Frank the doctor to come check on her. Marie does not want to see the doctor, at least not Uncle Frank. David’s parents soon find out that Uncle Frank, Wes’ brother, has molested and raped many Indian girls during his visits, and Marie has been a victim. When word gets out, Marie all of a sudden dies and Uncle Frank is to blame. How can Wes, the town’s sheriff, arrest his own brother?


I was not sure what to expect from this book. I only got it to fulfill my Montana tag for a challenge that I am working on at Shelfari, so I had no idea what the book was about.


The story starts with a bang. You know right away that something horrible happened to David and his family in the year of 1948. This kind of beginning had me hooked.


Montana 1948 is very short but has some powerful points. It talks about the racial discrimination against Indians (Native Americans) and the relationship between Indians and whites.  It brought up the issues on sexual harassment and rape on Indian women and how these violent acts were ignored. The book also brought up how it’s hard to prosecute someone in your own family who is seen as a war hero and most important question was asked: what’s more important, family or justice?

The Big Over Easy by Jasper Fforde 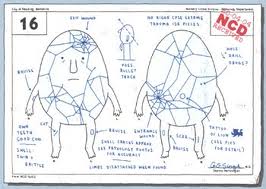 This was my first Jasper Fforde novel and it was completely bonkers! I was not expecting to have various storybook characters be part of the book. I found it completely hilarious how Humpty Dumpty was a womanizer and an alcoholic, how Detective Jack Spratt is actually from Jack and the Beanstalk, how Mary Mary is quite contrary, how Prometheus (a Greek Titan) wants to marry Jack’s daughter, and how Rapunzel is an adulterer. I was not expecting all of this silliness to happen and I quite enjoyed it!


This book is not perfect though. There is so much going on with events and many characters are introduced that it is hard to focus on all the key points. I tried to pay attention to everything so I could try to figure out who the suspect was but I ended up getting a headache instead. Of course, this did not stop me from reading the book.


I really liked it and found it to be quite unique. I am actually looking forward to reading Fforde’s other novels.
Posted by Vonnie at 12:21 AM