Audiobook Review on Love in the Afternoon by Lisa Kleypas AWWW! 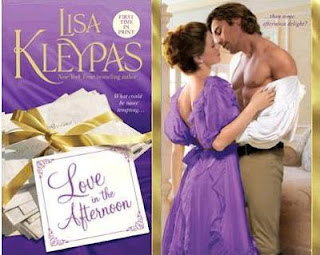 The youngest sibling of the Hathaways, Beatrix, is a lover of animals and prefers to be around her pets instead of people. Though she is pretty, her free spirit and strong will has not help her win a beau.

The story starts with Beatrix with her friend Prudence as she reads a letter received by Prudence from a soldier, Captain Christopher Phelan, who is off in war. Prudence does not want to reply because she detest war and thinks that Christopher is a bore. Beatrix takes it upon herself to reply back to him knowing that Christopher needs love and support.

Soon Beatrix and Christopher begin to swap letters that soon turn into love letters. The only problem is Christopher thinks that Beatrix is Prudence and Christopher is returning from the war. Should Beatrix tell him the truth?

OMG! I love this book! It is the fifth and the last book in The Hathaway Series and it's my absolute favorite! I was hesitant at first to listen to the book because Beatrix was my least favorite of the siblings; plus, I thought it couldn't get better than Married by Morning, the fourth book. Boy, was I wrong and surprised!

Beatrix was such a quirky person. Though it was hard to see her as a 23-year-old because she acted as if she were 15, I could not help but love her character. She relates everything to animals and does not care what people think of her. I really enjoyed the scene where she compares human sex to squirrels. I found myself snorting at that part.

Christopher was a tragic character yet lovable. He was a great example on how soldiers suffer from PTSD when they return to civilian life. I wanted to hug him and help make his nightmares go away.

These two were perfect for each other. Christopher is able to protect Beatrix and Beatrix is able to help him cope with his past. It was such a delight to listen to how these two interacted.

Rosalyn Landor has narrated the other books in the series as well, and she did an excellent job. I love how she portrayed Beatrix and I love how she made the story very entertaining to listen to. I had a huge smile throughout the book.

In all, Love in the Afternoon is a great book and I highly recommend it. It makes me sad that the series is over because I really love the Hathaway siblings. I'm glad to have gotten the chance to learn their stories though.