ARC Review and Giveaway! The Angels' Share by Rayme Waters 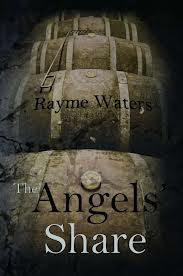 Synopsis: Born into a tumultuous world of neglectful bohemian parents and an overbearing grandmother, Cinnamon Monday lives through an imagination inspired by the nineteenth-century heroines she admires. As she grows older, and her make-believe worlds are not enough to protect her, she descends into drug addiction and eventual resignation. When this finally leads her to be physically beaten near the point of death, she is saved by a compassionate neighbor named Sam who gives Cinnamon the opportunity to reclaim her life. Now, working at Sam s vineyard in the beautiful Dry Creek Valley, Cinnamon Monday attempts to put her life in order, find the will to overcome past demons, and utilize her strengths to live a positive, successful life on her own terms.

About the Author: Rayme Waters has lived much of her life in Northern California with a short but influential time in Sweden. She is a graduate of UC Santa Cruz and Standford University. Her short fiction has been published in numerous magazines and journals and has been nominated for a Pushcart Prize and the Dzanc Best of the Web Award.


My Thoughts: This book started off pretty strong. I was completely gripped from the very first sentence of the book. It opened up with the main character, Cinnamon, beaten up and almost close to death outside of her trailer. I wanted to know more on how she got there and wondered how she was going to survive.

The chapters then started to switch between the past and the present. The past concentrated on describing Cinnamon's youth and how she grew up to be in the situation we find her in the beginning. We come to learn that she had very immature, drug addicted parents that neglected Cinnamon's education. By reading about her past, we come to understand Cinnamon's character. The chapters describing the present talked about how Cinnamon was recuperating from her wounds and was learning how to get better by working at the vineyard with the help of Sam. I enjoyed how Waters was able to switch between the past and present.

Cinnamon was a damaged character that soon learned how to heal with the help of the minor characters. Sam, the man who finds Cinnamon, is a very caring character who became Cinnamon's guardian angel. Not only does he save her from death, but he made sure that Cinnamon was away from anything that could take her back to her dangerous past and gave her the opportunity to better her life. The grandmother's character appeared to be cold and uncaring. In reality she loved Cinnamon very much and tried to show Cinnamon an alternative life by taking her away from her parents once a month while she was growing up.  I found these two characters to be my favorite supporting roles.

The beginning of the book showed great promise on what a wonderful book this could be. The downside of the book was how the plot was presented. There were many wonderful and heart-wrenching moments in the book, but there were also many parts that did not help move the story forward. There were times that a new "mystery" was introduced to the plot making you believe that something important was going to happen but then in the next chapter, this "mystery" was quickly forgotten. This started to show a lot more towards the end of the book. Since this is an ARC, it made me wonder if these parts would either be omitted or made stronger in the final copy.

Overall, this was an enjoyable read. I'm glad I got the chance to read Rayme Waters' debut novel since she showed great talent in writing in the majority of the book. With a little bit more focus with her plot, she will excel with this book.

The Angels' Share will be out August 30, 2012.
You can pre-order your copy at Amazon.com

a Rafflecopter giveaway
Posted by Vonnie at 1:25 AM