Review on Seraphina by Rachel Hartman 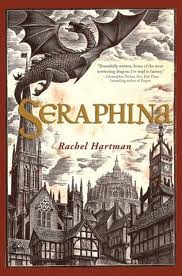 Seraphina has a secret. She is half-dragon. No one must know this secret because it is against the law for dragons and humans to breed together. Seraphina tries to live as normally as she can though. Unfortunately, Prince Rufus is murdered and it seems that a dragon was behind the killing. Now Seraphina must join Prince Lucian to solve the murder.

***
Oh, how I tried to like this book. I've read so many great reviews and was quite excited to learn that my library had it. But I couldn't get into it! It was too slow for me. I found myself wanting to stop reading this book after the many times I fell asleep.

Why did it bore me? The pacing dragged on and there was too much unnecessary information about this world and not enough of the things that were important to the story.  It kept talking about the Saints that had nothing to do with the plot and it kept mentioning Seraphina's grotesque garden that just confused me with the little information that was given. Maybe these details will make sense in the next book (it's obvious there will be another one with the way it ended) but I don't think that I will read it.

I was not too thrilled with the main character, Seraphina. I felt that she was too dull, even though it's understandable why she was shy, but  you don't see much bravery out of her until towards the end. She's constantly worried about her secret (again understandable) and her dire situation, but she obviously had a better life compared to the other half-breeds that were introduced. I found myself wanting to hear the story from the other characters instead. They were more interesting.

Also, I was not too thrilled with love interest between Seraphina and Prince Lucian. All we see is that Seraphina tries to avoid Lucian because he is betrothed to the princess and he's too nosy but then all of a sudden she is in love with him. It makes sense since she's a recluse and Lucian is the first man to show some interest in her. Their relationship was pretty pointless and felt that it wouldn't make much of a difference if it were omitted from the book.

The book is not a complete let down though. I really did admire Hartman's writing because she really knows how to write. I also loved the fact that there were many unknown words there for me that I had to use a dictionary (I love learning new words). Also, I love the descriptions of the dragons and how being human gives them feelings. The idea of developing feelings was so fascinated for me that I wished that it was dealt with more.

In all, I know that I'm one of the very few that didn't love Seraphina so don't let my review turn you away from the book. Give it a go if you are really interested. Unfortunately, it was not the book for me.
Posted by Vonnie at 6:29 PM