Review and Giveaway: A Great and Terrible Beauty by Libba Bray 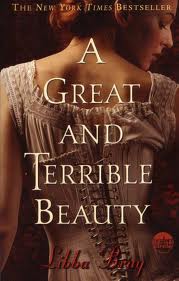 It’s 1895, and after the suicide of her mother, 16-year-old Gemma Doyle is shipped off from the life she knows in India to Spence, a proper boarding school in England. Lonely, guilt-ridden, and prone to visions of the future that have an uncomfortable habit of coming true, Gemma’s reception there is a chilly one. To make things worse, she’s been followed by a mysterious young Indian man, a man sent to watch her. But why? What is her destiny? And what will her entanglement with Spence’s most powerful girls—and their foray into the spiritual world—lead to?

My thoughts: When I first picked up this book, I thought that it was a historical novel. I was very surprised to find myself reading about teenage girls who are mean to others and to learn that there's some supernatural elements. It was not a horrible surprise but it did catch me off guard.

I liked how magic was involved in this book. In a weird kind of way this book reminded me of the old film, The Craft. One girl wants revenge and beauty, one wants to find true love, another wants to be brave and independent, while the other wants to know who she really is. All of this is achieved through magic, just like in the movie. I also enjoyed how the author kept pointing out that magic is not what it seems and that one should be very careful in using it. I liked the idea of being able to escape reality and to temporaly go to a garden where your desires are fulfilled.

The problem that I had with the book though was how modern it appeared to be. This is set in the late 1800s in England yet it felt like I was reading a book on today's high school girls in the United States. It was as if some modern girls were accidently transported into the past and were forced to be obedient and wear corsets. Even some of the teachers were too modern for this world. Maybe it was written this way so the young adult population could connect?

Another issue that I had with the book was how Libba Bray kept insisting in describing how awful it is to wear a corset. She really wanted to let the reader know that these old fashions were torture devices. I understand that corsets were painful to wear, but it just became irritating and unreal that these girls kept mentioning it during their discussions. It's almost like if today's girls kept briging up how uncomfortable bras are in every conversation.

In all, the book did keep me entertained and made me want to know how it was going to end. I give it:

Now, I am giving my copy of this book away. It is hardback and in great condition. Just fill out the form below:

a Rafflecopter giveaway
Posted by Vonnie at 8:25 PM