Synopsis: R is having a no-life crisis—he is a zombie. He has no memories, no identity, and no pulse, but he is a little different from his fellow Dead. He may occasionally eat people, but he’d rather be riding abandoned airport escalators, listening to Sinatra in the cozy 747 he calls home, or collecting souvenirs from the ruins of civilization.

And then he meets a girl.

First as his captive, then his reluctant house guest, Julie is a blast of living color in R’s gray landscape, and something inside him begins to bloom. He doesn’t want to eat this girl—although she looks delicious—he wants to protect her. But their unlikely bond will cause ripples they can’t imagine, and their hopeless world won’t change without a fight.

My thoughts: I really wanted to read this book because I wanted to see the movie. I bought it two weeks ago and moved it up my TBR pile so I could get it read before the movie came out. It was good to see that Warm Bodies by Isaac Marion was a fun read.

The first chapter was a great starter. You come to meet R and the world he was living in. Humor was also introduced in this chapter to lighten up the gruesome details on how the zombies feasted. If it weren't for the comic relief, I don't think I would have been able to stomach these scenes.

What I really enjoyed about reading this book was how it was based on a zombie's point of view. It gave you a sense that somehow there was still some humanity left in these corpses. I also found the theory behind why zombies love to eat brains interesting. It was the only organ in the human body that zombies could eat to feel alive again for few seconds.

The characters were likeable and the story was fun. The ending was not my favorite though, but it did make sense why it happened that way. I give this book: 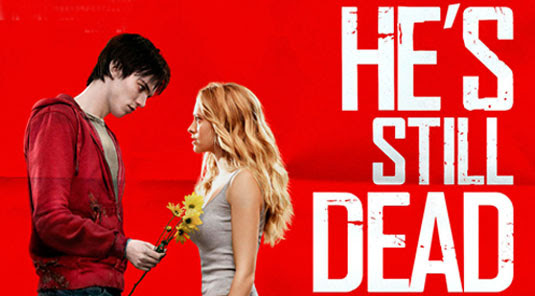 This film directed by Jonathan Levine, stars Nicholas Hoult as R and Teresa Palmer as Julie.  Like the book, the movie was entertaining.
I really liked how the movie tried to stay true to the book. R's inner monologue was still there, the zombie life and the settings were there, and pretty much the characters remained almost the same (with the exception of Julie's friend Nora who was suppose to be Ethiopian instead of white). Of course there were some changes in the film, but I don't think that it made much of a difference.
The whole theme of the book was still alive in the movie. I liked how the idea of love cures anything was more visible in the film than in the book.
I also liked how the movie ended much more than the book.
I walked out of the theater with a smile on my face and, I have to admit, I found myself liking it very much. I also rate this movie 4 stars.
Posted by Vonnie at 2:07 PM