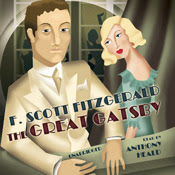 Synopsis: Jay Gatsby is the man who has everything. But one thing will always be out of his reach ...Everybody who is anybody is seen at his glittering parties. Day and night his Long Island mansion buzzes with bright young things drinking, dancing and debating his mysterious character. For Gatsby - young, handsome, fabulously rich - always seems alone in the crowd, watching and waiting, though no one knows what for. Beneath the shimmering surface of his life he is hiding a secret: a silent longing that can never be fulfilled. And soon this destructive obsession will force his world to unravel.

My thoughts: I read The Great Gatsby back in tenth grade and was not too thrilled about it. Almost all of my classmates loved it and I could not understand why. Now that the movie is coming out with Leonardo DiCaprio, I thought that I should go back to the book and give it another chance. Perhaps this time I come to appreciate the story more, which I did.

I enjoyed how this book was set in the 1920s since I haven't read many books based on this era. I liked the descriptions of the characters and the descriptions of the high class. Though I do have to admit that I was a little bored in the beginning because there was not much going on other than rich people talking about rich things. Once it got halfway, things picked up for me and I was entertained with the details surrounding Gatsby and Nick.

My thoughts on the performance: This was not my favorite audiobook. Anthony Heald had a decent voice but it was too calming for me. I had to force myself to sit up and do things because I found myself dosing off listening to him. He did put some emotions into describing the events but there wasn't much of a voice change when it came to different characters.

Overall, I appreciated the storyline a lot more this time and give it 4 stars. The audio performance was a 3 star for me, which rounds this audiobook to: