Life as We Knew It by Susan Beth Pfeffer (audiobook)

Synopsis: It's almost the end of Miranda's sophomore year in high school, and her journal reflects the busy life of a typical teenager: conversations with friends, fights with mom, and fervent hopes for a driver's license. When Miranda first begins hearing the reports of a meteor on a collision course with the moon, it hardly seems worth a mention in her diary. But after the meteor hits, pushing the moon off its axis and causing worldwide earthquakes, tsunamis, and volcanoes, all the things Miranda used to take for granted begin to disappear. Food and gas shortages, along with extreme weather changes, come to her small Pennsylvania town; and Miranda's voice is by turns petulant, angry, and finally resigned, as her family is forced to make tough choices while they consider their increasingly limited options. Yet even as suspicious neighbors stockpile food in anticipation of a looming winter without heat or electricity, Miranda knows that that her future is still hers to decide even if life as she knew it is over.


My thoughts: I was very hesitant to read or rather listen to this book because it did not appeal to me at first, but after reading some of my friends' reviews I had to give it a try. I'm so glad that I did! This has become my new favorite!

The thought of an asteroid hitting the moon, causing it to shift the moon closer to earth, and then causing tremendous chaos on earth, quickly hooked me in. It started off with Miranda journaling about her life as a sophomore. This part was not too interesting for me because it was a typical teen girl's drama. Luckily the story shifted quickly as it described the event with the moon and the after affects.

I was caught with the whole emotions of the story. It actually made me fear that something like this could happen to us. I found myself Googling to see how far I live from the ocean but came to realize that California is filled with fault lines, which makes me screwed anyway. Do I really want to survive if such a tragedy were to happen? Gosh, I hope not. Listening to how Miranda and her family suffered and struggled just to stay alive was horrifying. I don't want my family and I to go throught the same thing.

My thoughts on the performance: Emily Baur did a wonderful job narrating this story. She captured Miranda's voice perfectly and she really knew how to emphasize the emotions brought on by the book. Hearing Emily describe what was going on only hooked me in even more. I think she did a great job in bringing Susan Beth Pfeffer's book to life.

I am very happy that I have listened to this book, even if it gave me nightmares. I found myself in various states of fear, distress, hopelessness, hope, irritation, and happiness. I even cried a couple of times. I give this audiobook: 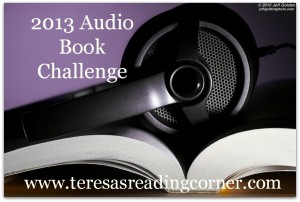