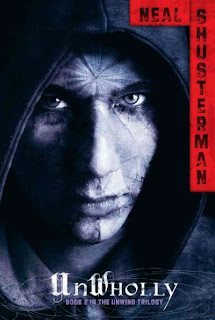 Synopsis: Thanks to Connor, Lev, and Risa—and their high-profile revolt at Happy Jack Harvest Camp—people can no longer turn a blind eye to unwinding. Ridding society of troublesome teens while simltaneously providing much-needed tissues for transplant might be convenient, but its morality has finally been brought into question.

However, unwinding has become big business, and there are powerful political and corporate interests that want to see it not only continue, but also expand to the unwinding of prisoners and the impoverished.


Cam is a product of unwinding; made entirely out of the parts of other unwinds, he is a teen who does not technically exist. A futuristic Frankenstein, Cam struggles with a search for identity and meaning and wonders if a rewound being can have a soul. And when the actions of a sadistic bounty hunter cause Cam’s fate to become inextricably bound with the fates of Connor, Risa, and Lev, he’ll have to question humanity itself.

My thoughts: I was looking forward to reading this book and was very glad that I finally found some time to read it. I greatly enjoyed UnWholly and I liked the addition of the characters.

Though it was not as "shocking" as the first book in the series, it did bring up many important ethical issues. What is the value of human life? How desparate are people to make themselves look and feel better in the expense of others? What is the meaning of being a parent? Over and over Shusterman described situations where teenage lives did not mean much. It was very sad in fact and it made my heart break that any excuse from a parent or guardian was used against these "troubled" teens. What happened to coming together and fixing their problems with words? How about therapy? Also, it was disgusting to see the advertisements in the book which made "unwinding" such a normal thing and made it sound that it's okay to better your body by using other kids' body parts. I understand it if it were a life or death situation, but not for cosmetic reasons. So, the issues from the world that Neal Shusterman mentioned really had me thinking.

The characters were also great. Connor, Risa, and Lev made an appearance again and we came to see how the events from the first book made each of these characters stronger. The book also introduced Cam and Starkey. Cam was a person created from different unwinds. The thought of him existing was scary, but you do end up feeling some sympathy towards him. Starkey was a stork with alpha male issues. He wanted to be a leader and wanted everything for himself no matter what the consequences were. His character was not likeable but you do understand him.

I was not sure at first what to rate this book since it was not as great as the first one. It did take me longer to read this one because I couldn't find myself to sit through more than three chapters at the same time. At first I thought maybe because it didn't interest me as much, but in reality, I couldn't read many chapters because I had to stop and let the story sink in. I found myself really thinking about the issues and the events in UnWholly. It made me start to question things that are going on today in our world. Because of this, I rate the book: