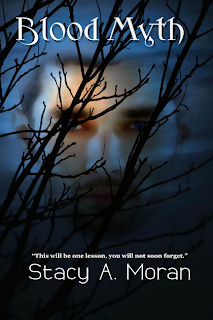 The Art of Safkhet Presents – Blood Myth
(The Myth Series)
Zakah Sange was born into a world of dark magick, always living in the shadows of his father, the Raka King. He was dangerously sexy and enigmatic; he used power and control to shape himself into a hard and cunning man. Zakah became a warrior, a weapon and the master of his own violence lurking within.

Sorina Ruzicka was the great granddaughter of the evil god Akhekh. She was born into a legacy of magickal gifts that she wanted no part of. After years touring as a blues singer she returned home where she only wanted the seclusion of the mountains. A chance meeting with the mysterious club owner forced Sorina into the battle of her life.

Can a willful witch, accept the controlling nature of a demon who demands submission? Trusts will be tested, lines will be crossed and a fate neither of them expected will be played out.

Available in Print and Ebook:  Purchase Link: Amazon
My thoughts: I was not sure what to expect before reading this book. Was this about vampires, werewolves, and/or gods? So it was a pleasant surprise to find out that it concentrated on ancient Egyptian demons and witches. I was even more surprised about the mature topics that were portrayed.
I was completely hooked when I started reading. I did had a little trouble at first with the names and terminology that were used. I had to keep going back and forth with the glossary to comprehend what was going on, but the story was strong that I wanted to continue reading it. I quite enjoyed the aspect of good vs. evil and how a demon fought within himself not to turn evil. Of course that meant that he had to do certain sadistic things to keep himself in control. There were action scenes and of course, very explicit sex scenes that it almost read like an erotic novel. These things did not shy me away but kept me intrigued.
As much as I found Blood Myth having a solid foundation, there was on thing that got to me that had me fuming at times: I did not like how "macho" Zakah was. He wanted Sorina to not only be submissive in the bedroom but in her daily life as well. His insistence that he had to be her protector and that they had to be together was annoying; he was too controlling and too possessive. When he first took Sorina, I was furious. If he wasn't able to read her mind, what he did to her was rape. My feminist side simply came out when reading what he thought and said. Fortunately, Sorina was a strong character who did not allow herself to be pushed too much. Though as much as these aspects got under my skin, I couldn't help continue reading the rest of the book.
Overall, the story was strong and Moran knew how create steamy scenes. Though I did not agree with everything that I've read, I continued to read on to see what would happen. The book ends with a cliff hanger, which makes me want to read the next book in the series, so this is a good sign. I rate this: 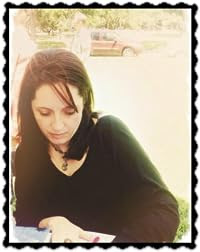 Author Bio Author Website
Stacy (SAM) was born in West Virginia but now finds herself living in Texas. She has loved writing since the first grade when she completed her first book, The Land without Rules. Her mother will tell you it was a brilliant book.
Throughout her school years she was in journalism and has been an avid reader of all literature. She has always craved the feeling of discovering an author's world for the first time. Now she devotes her time to creating her own worlds. Stacy focuses mainly on paranormal romance and poetry. She loves creating dominant male characters and headstrong females for her books.
Stacy now finds herself on a new journey and finally has taken the leap to go after her dreams. She recently finished a poetry book, Whispers in the Dark with two fellow authors and finished her first novel Blood Myth.
Posted by Vonnie at 10:58 PM