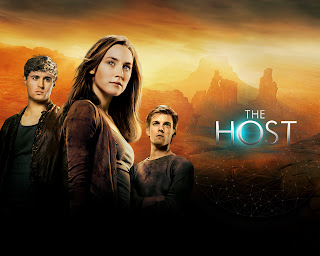 Synopsis: When an unseen enemy threatens mankind by taking over their bodies and erasing their memories, Melanie will risk everything to protect the people she cares most about, proving that love can conquer all in a dangerous new world.
Director: Andrew Niccol
Writers: Andrew Niccol
Stars: Saoirse Ronan, Max Irons, Jake Abel

My thoughts:   I was hesitant in watching this movie at first because I was not too sure what direction it was going to take. I guess I had Twilight prejudices. Fortunately, I found this film to be quite enjoyable.

It has been years since I've read The Host, but I liked how much of the book stayed true to what I remembered. Yes, there were changes and scenes that were added but these things did not butchered what the book intended. The message of how these souls were peaceful creatures and could only survive by taking over bodies was still there. Also, the love triangle/square between Melanie/Wanda, Ian, and Jared was shown, as well as Melanie's urgency to make sure her brother was okay. My complaint about the love between Wanda and Ian was that it was a little rushed. I would have liked it that their relationship was delved into more like in the book, but then the movie would have been another hour long.

The acting was not the greatest and many of the lines were a little cheesy. There were parts were I felt that there wasn't enough emotion or the lines were forced that it didn't flow well. Then there were lines that were just awkward and laughable. But as the story progressed, these things didn't matter as much. In fact, I really enjoyed Wanda's emotions that were portrayed towards the end when she was on the table. It almost made me cry.

As a whole, the movie was decently done. I found myself liking it more than what I was expecting. I rate it: