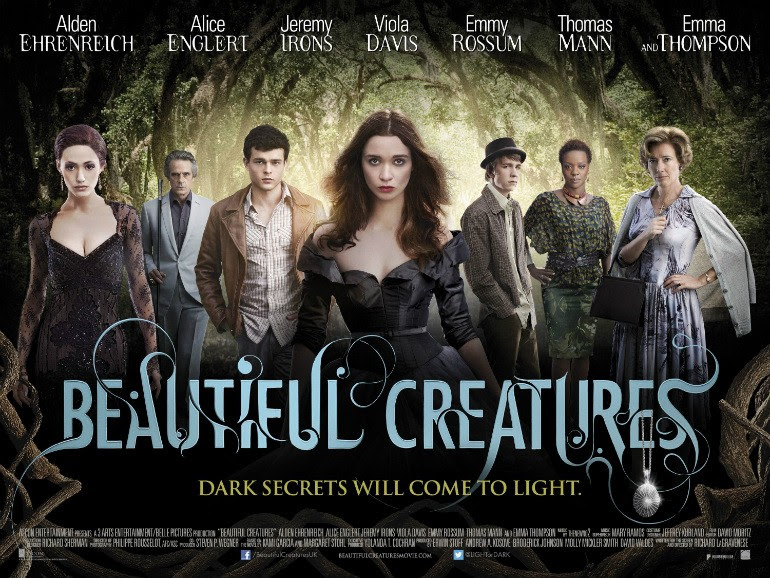 My thoughts:  I really wanted to see this movie when it first came out in the movie theaters but I didn't get the chance to see it until my library owned a copy of the movie. It has been a couple of weeks since I've seen it and I'm still scratching my head as to how I feel about it.

My mixed feelings came from the many changes that were done in the movie. I understand that movies tend to deviate from the original book and I try to view book-to-movies as a whole different story, but it still upsets me when the biggest plot points from the book are completely changed. That's what happened with Beautiful Creatures. Because the plot was done differently, it caused a chain of other changes that had me saying, "what?!" I even recall saying right after the movie ended, "I hate it." Now, do I really hate it? No, I don't think so. I was (and still am) a little upset on the direction that the movie lead.

However, there were a few good things that I did enjoy from the movie. First off, the acting was great. I completely bought into what the characters were saying to each other since it all sounded organic and sincere. The actors knew how to portray the characters. Next, I enjoyed the writing that was done for the movie. Like I mentioned, the dialogue between the characters were believable and a lot of it was very witty. Last, I loved the cinematography. The locations and the wardrobe were absolutely stunning. These were the things that I found enjoyable.

As a whole, the movie was not the greatest but it could be enjoyable. One has to remember to set this movie apart from the book to fully appreciate it. I rate it: