Audiobook Review: King and the Dragronflies 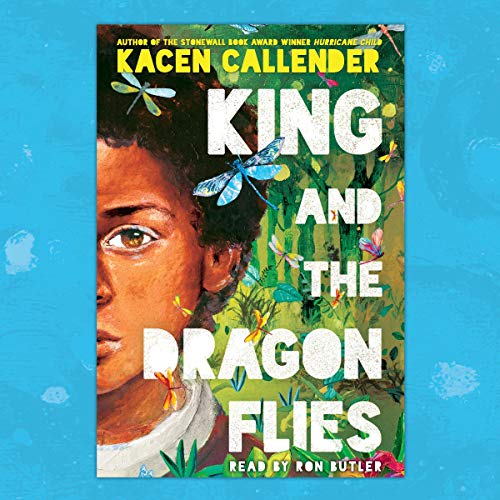 Twelve-year-old Kingston James is sure his brother Khalid has turned into a dragonfly. When Khalid unexpectedly passed away, he shed what was his first skin for another to live down by the bayou in their small Louisiana town. Khalid still visits in dreams, and King must keep these secrets to himself as he watches grief transform his family.

It would be easier if King could talk with his best friend, Sandy Sanders. But just days before he died, Khalid told King to end their friendship, after overhearing a secret about Sandy-that he thinks he might be gay. "You don't want anyone to think you're gay too, do you?"

But when Sandy goes missing, sparking a town-wide search, and King finds his former best friend hiding in a tent in his backyard, he agrees to help Sandy escape from his abusive father, and the two begin an adventure as they build their own private paradise down by the bayou and among the dragonflies. As King's friendship with Sandy is reignited, he's forced to confront questions about himself and the reality of his brother's death.

My thoughts: What can I say about this book? I finished listening to this last week and I am still trying to find the words to express how I feel about it.  For being a middle school book, it dealt with many serious topics. However, these topics were handled well and got me thinking. I have to say, this was a pretty good book.
As I mentioned, King and the Dragonflies focused on some serious topics. First, it talked about death and grief. King lost his older brother, Khalid, and King was learning how to live his life without his big brother. The feelings of anger, loneliness, and sadness kept plaguing King in trying to overcome his brother's death. We also saw how King's parents were trying to cope with their son's death. The scenes between King and his parents were some of the best in the book. It showed the raw emotion of the characters. Next, the book talked about race. King was African American and we got to see through his young eyes the fear of being attacked due to the color of his skin. His friend's brother was a racist and was rumored that he killed an African American. The fear King had when encountering his friend's brother had me praying for King's life. The book also talked about gender roles in the African American culture. King's father constantly told King that men do not cry. African American men were expected to act a certain way and King was trying to live up to that. King was shaken to see his father breaking the "norms" after Khalid's death; King then had to unlearn the gender roles that was drilled into his head.
Other topics that this book talked about were homophobia and abuse. King's friend, Sandy, came out to King. King was told to stay away from Sandy so people did not think that King was gay as well. The students in King's school teased Sandy but the homophobia was more prominent in King's self and family. Then there was abuse. Because of his sexuality, Sandy was abused by his father, who was sheriff. Sandy ran away and looked for help from King. King worried about Sandy and did his best to protect him. What made it really sad for me was that Sandy could not really get help at first; his dad was the person that the town's people would go to for emergency. Let's just say that I was relieved for Sandy's outcome at the end of the book.
This book was narrated by Ron Butler. He did a fantastic job in portraying King. I was able to understand King's confusion, fear, and anger with Ron's performance. His tone of voice kept me hooked to the story. My only complaint was when he tried to do the other characters. He did a great job with King's father, but it was sometimes hard to distinguish when another character was speaking. However, this did not stop me from listening.
As a whole, this was a good production. For a middle school book, I enjoyed how the serious topics were dealt with. I also enjoyed listening to King's "growth" in the story. He had to go through a lot. I would recommend this book to young readers and older ones. I rate it: