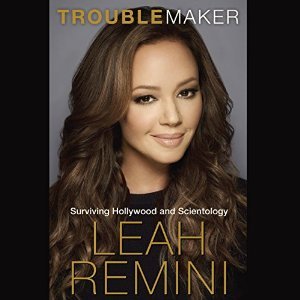 Leah Remini has never been the type to hold her tongue. That willingness to speak her mind, stand her ground, and rattle the occasional cage has enabled this tough-talking girl from Brooklyn to forge an enduring and successful career in Hollywood. But being a troublemaker has come at a cost.

That was never more evident than in 2013, when Remini loudly and publicly broke with the Church of Scientology. Now, in this frank, funny, poignant memoir, the former King of Queens star opens up about that experience for the first time, revealing the in-depth details of her painful split with the church and its controversial practices.

Indoctrinated into the church as a child while living with her mother and sister in New York, Remini eventually moved to Los Angeles, where her dreams of becoming an actress and advancing Scientology's causes grew increasingly intertwined. As an adult, she found the success she'd worked so hard for, and with it a prominent place in the hierarchy of celebrity Scientologists alongside people such as Tom Cruise, Scientology's most high-profile adherent. Remini spent time directly with Cruise and was included among the guests at his 2006 wedding to Katie Holmes.

But when she began to raise questions about some of the church's actions, she found herself a target. In the end, she was declared by the church to be a threat to their organization and therefore a "Suppressive Person," and as a result, all of her fellow parishioners—including members of her own family—were told to disconnect from her. Forever.

Bold, brash, and bravely confessional, Troublemaker chronicles Leah Remini's remarkable journey toward emotional and spiritual freedom, both for herself and for her family. This is a memoir designed to reveal the hard-won truths of a life lived honestly—from an author unafraid of the consequences.

My Thoughts: This was an interesting read. I was not too familiar with Leah Remini before this; I knew she was in The King of Queens show but I never watched it. My husband recommended that I listened to this book because I was curious about Scientology. I wanted to know what Scientology really was and I wanted to learn more about the controversy about this religion.
Leah Remini described her life with Scientology. Though she did not delved too much on the crazy theories that I've heard Scientologists believed in, she did describe some of the religion's ideologies and how it kept its followers "tied" to the church. I was stunned to find out that this religion did not believe in traditional education and forced its members to be on "course" pretty much their whole entire days, especially if the member did something that was frowned upon. What was more shocking was to learn how much money was expected for members to contribute to their courses and to the church. It was sickening!
Leah also talked about how she got into acting and got married. It was fun to hear about her early years of becoming an actor and the various shows she was on. She also discussed her relationships with various celebrities and how she met her husband. She also talked about Tom Cruise; boy...that sure was interesting!
It was entertaining to listen to Leah's voice. I think its important that the author is the one narrating their memoirs/autobiographies in audiobooks. It makes the book more realistic and unique. Leah had a brash attitude that it made it sometimes difficult to like her, but she was very honest which made me appreciate Leah more. It was heartbreaking to hear her disappointment with Scientology yet relieving to hear that she finally opened up her eyes.
As a whole, this was an entertaining audiobook. Leah had a strong voice, which made her story even more fascinating.  I got to hear one side of this crazy religion and made me want to research more about it. I rate it: