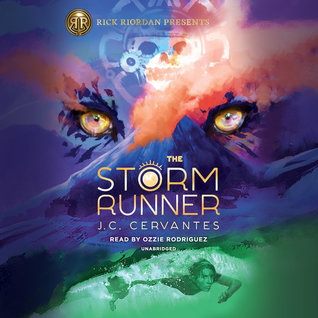 Zane has always enjoyed exploring the dormant volcano near his home in New Mexico, even though hiking it is challenging. He'd much rather hang out there with his dog, Rosie, than go to middle school, where kids call him Sir Limps a Lot, McGimpster, or Uno—for his one good leg. What Zane doesn't know is that the volcano is a gateway to another world and he is at the center of a powerful prophecy. A new girl at school, Brooks, informs him that he's destined to release an evil god from the ancient Maya relic he is imprisoned in—unless she can find and remove it first. Together they return to the volcano, where all kinds of crazy happens. Brooks turns into a hawk, a demon attacks them in a cave, and Rosie gives her all while trying to protect Zane. When Zane decides to save his dog no matter the cost, he is thrust into an adventure full of surprising discoveries, dangerous secrets, and an all-out war between the gods, one of whom happens to be his father. To survive, Zane will have to become the Storm Runner. But how can he run when he can't even walk well without a cane?
Feisty heroes, tricky gods, murderous demons, and spirited giants are just some of the pleasures that await in this fresh and funny take on Maya mythology, as rich and delicious as a mug of authentic hot chocolate.
Goodreads

My thoughts: I am so happy to encounter more books that have mythology from other cultures, especially from Latin America. When I heard that this book had Mayan mythology in it, I knew I had to read it. I could not get my hands on a physical copy but I was able to borrow the audiobook instead. I had so much fun listening to this book!
First off, I really loved the main character Zane Obispo. He was funny, kind, loving, and respectful to his elders. Despite being bullied for having a physical disability, it did not stop him from being his true self. If anything, it made him stubborn and made him brave to attempt daring adventures. Oh yeah...did I say he had a physical disability? I am thrilled to see more representation of people with disabilities in literature! Zane had one leg shorter than the other and required a cane to walk. The author did a great job in portraying Zane's feelings when it came to his leg and I enjoyed learning how the disability played a big role later on in the story.
It was fun to learn about different Mayan gods. We had our antagonist, Ah Puch, who was the god of death and the underworld. I laughed every time Zane called him "Puke face." Next, there was Hurakan, the god of storms and chaos. It was fun to learn the connection this god had with Zane and Ah Puch. There were other gods that were mentioned, but the one that was mentioned a few times and I wished was an actual character was IxCacao, the goddess of chocolate. Yup, chocolate!
Ozzie Rodriguez was the narrator of this audiobook. He did a fabulous job in capturing Zane's voice and bringing the other characters to life. I laughed at his portrayal of Ms. Cab as a chicken and Zane's uncle, Hondo. However, I did not like his portrayal of Jazz, the giant. His voice made me cringe every time Jazz spoke. A couple of times I had to stop listening because I could not stand listening to Jazz speak. Other than this character, Ozzie Rodriguez did a great job in narrating the book.
As a whole, this was an entertaining book. I loved the characters, the adventure, and the information about Mayan mythology. Then ending was a great hook, which encourage me to borrow the next book. I rate this: