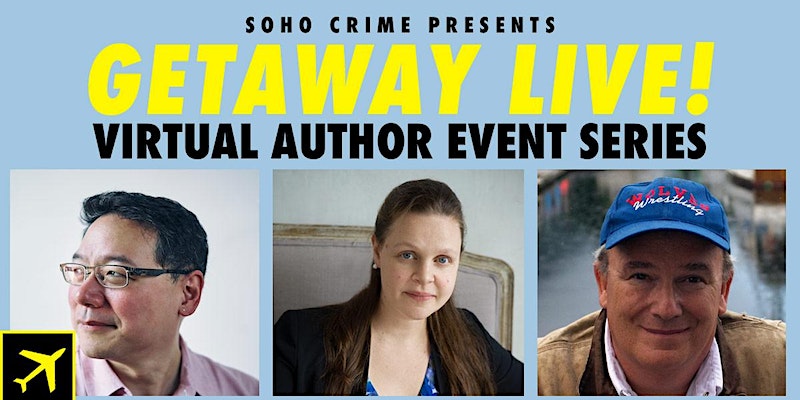 I used to read crime books all the time in my early 20s. Now, it's rare when I pick one up. I encountered a few crime book companies when attending the LA Times Festival of Books and I believe that I saw a booth for SOHO Crime, but sadly, I never really stopped at the booth. So when I saw that there was going to be an online event with two SOHO Crime authors, I figured I should check it out. And boy, I'm sure glad I did!
This online event was a conversation with John Straley and Ed Lin, lead by Juliet Grames.
These two authors were absolutely hilarious! They gave a brief synopsis of where they were from and what lead them into writing crime stories. Both John and Ed had great chemistry that they were able to lead the discussion mostly on their own; there was no need for too many questions from the facilitator or from the audience. If anything, Juliet Grames just commented to what the authors were talking about or gave side facts to the audience about the authors.
I was highly entertained with this online event that it made me a little sad when it ended. But hey, this event did encourage me to check out crime books again, especially books written by John Straley and Ed Lin. 😁
About SOHO Crime
Per their website: Soho Crime has been publishing atmospheric crime fiction set all over the world for over twenty years. Its books range from detective fiction, police procedurals, thrillers, espionage novels, revenge novels, stories of thieves, assassins, and underworld bosses. Because these books are set in various places around the globe, the books contain immersive adventure steeped in cultural and setting detail. Check out their website: https://sohopress.com/soho-crime/ .
About John Straley
Per John during the event: John Straley was dyslexic and did not do well in academics. His father encouraged him to have a career with animals. John got a certificate for horse shoeing but had to leave this career when his wife got a job in Alaska. Since there were no horses in Sitka, Alaska, John became a criminal defense investigator. After retiring, he then began to write crime fiction. For more info, check out his website: http://www.johnstraley.com/ .
About Ed Lin
Per Ed during the event: Ed Lin was born in New York but did live in New Jersey for a few years. He is of Taiwanese and Chinese descent and he is currently living in Brooklyn with his wife, actress Cindy Cheung. Ed gave a very small synopsis about himself. He did mention that he had always wanted to write and started at a young age by writing poems. He published his first crime book in 2014 through Soho Crime. For more info, check his hilariously titled website, http://www.edlinforpresident.com/ .
About Juliet Grames
Per her website: Juliet Grames is from Connecticut and is a book editor at Soho Press. She is also the associate publisher and curator of the Soho Crime imprint. She has currently written a book, https://www.julietgrames.com/ .
As tempting it is to buy all their books, I have to wait a bit due to finances. However, I have added all three authors on my wishlist on Amazon. I can't wait to get a hold of their books!
Posted by Vonnie at 10:13 AM