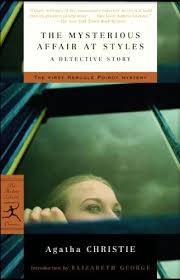 Synopsis: Who poisoned the wealthy Emily Inglethorpe, and how did the murderer penetrate and escape from her locked bedroom? Sus-pects abound in the quaint village of Styles St. Mary?from the heiress?s fawning new husband to her two stepsons, her volatile housekeeper, and a pretty nurse who works in a hospital dispensary. Making his unforgettable debut, the brilliant Belgian detective Hercule Poirot is on the case.

My thoughts: There are many mystery books written by Agatha Christie and I have finally read my first. I've been meaning to read one of her books for the longest time but I had no idea where to start. It wasn't until someone recommended that I start with this book, which introduces a very popular character, Hercule Poirot. I was thrilled to finally get started.

The plot was simple enough: rich, old woman gets poisoned and her younger husband was quickly suspected. I liked how many of the characters soon became suspects and I really liked how the true murderer was revealed. I was even a little baffled because I thought that I guessed right who the real villain was. Though this was great, the book did overwhelmed me with too many clues that I had to force myself to keep focused. Even the introductions in the beginning had me rereading the first chapter three times just to grasp what was going on (this of course could be all me). I did read that Christie's writing style does improve with her other books so perhaps the other ones will be a bit smoother to read.

Next, my favorite thing about this book was Hercule Poirot. He was a funny, little, old man who was very sentimental. He was smart and always seemed to be in a very positive mood. I did wondered though how he could be close friends with Hastings, the narrator of the story, when Hastings himself appeared to be quite dumb and naive compared to Poirot. I guess the incredible Poirot needs to have his "Robin" to make him appear like a genius.

This was a pretty good read; it was not perfect but it was still entertaining. I liked Hercule enough that I might just continue on with the series. I'm just glad that I was able to accomplish one of my goals: read an Agatha Christie book. I rate this: