Narrated by Ryan Do and Vyvy Nguyen 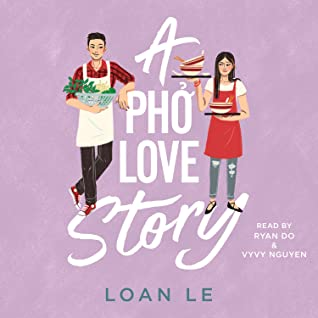 If Bao Nguyen had to describe himself, he’d say he was a rock. Steady and strong, but not particularly interesting. His grades are average, his social status unremarkable. He works at his parents’ pho restaurant, and even there, he is his parents’ fifth favorite employee. Not ideal.

If Linh Mai had to describe herself, she’d say she was a firecracker. Stable when unlit, but full of potential for joy and fire. She loves art and dreams pursuing a career in it. The only problem? Her parents rely on her in ways they’re not willing to admit, including working practically full-time at her family’s pho restaurant.

For years, the Mais and the Nguyens have been at odds, having owned competing, neighboring pho restaurants. Bao and Linh, who’ve avoided each other for most of their lives, both suspect that the feud stems from feelings much deeper than friendly competition.

But then a chance encounter brings Linh and Bao in the same vicinity despite their best efforts and sparks fly, leading them both to wonder what took so long for them to connect. But then, of course, they immediately remember.

Can Linh and Bao find love in the midst of feuding families and complicated histories?

My Thoughts:  I love pho! I love the aroma, the taste, and the warm feeling I get when I eat pho. So when I saw this book, I jumped at the chance to listen to it. I was not too sure what to expect because, honestly, I only picked this book because of the title.

This was a modern retelling of Romeo and Juliet.  Linh and Bao are rivals, not by choice. Their parents owned different pho restaurants that were located directly across from one another. The two feuding restaurants were always trying to up one another by either having special sales or by introducing new items to their menus. It was very secretive at first as to why the two families disliked one another but it slowly got revealed at the end.

I thought this was a sweet love story that took inspiration from Shakespeare's classic. I liked how Linh and Bao slowly came to acknowledge their feelings for one another. Though this was a cute and easy read, I do admit that sometimes Linh and Bao felt a little flat and some parts felt a little too long for me.

I am glad I listened to the audio version of this book. I enjoy listening to different narrators as they tell the story based on the characters they're supposed to portray. Ryan and Vyvy did a great job in bringing Linh and Bao to life. They had good diction, cadence, and tone. They helped me stay focused on this story, especially during the scenes where the food was described.

In all, this was a pretty good book. It was cute, easy, and delicious. Yes, delicious. So warning to anybody who decides to read this book: You will get hungry! I rate this: